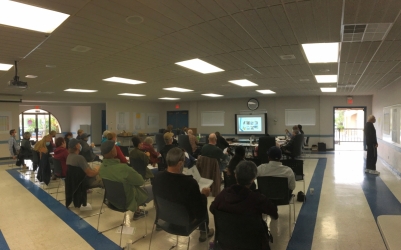 October 25, 2021 (Lemon Grove) -- Anyone who owns a car hopes to drive on roads that are smooth and safe, for their sake and their community’s. The reality for many drivers in Lemon Grove is the opposite, as they face an array of holes, cracks, and ridges that jostle their daily transit.

The good news is that the city will soon be making a substantial investment to fix some of the city’s worst roads. The bad news is that there’s not currently enough money to repair all of the streets in need of upgrades. So on Saturday, October 23, the Lemon Grove City Council held a special public workshop at the community center to address the condition of local streets.

The system used to assess and repair the city’s paved roads is up for renewal in the coming year, so residents and City Councilmembers alike had questions for the Department of Public Works (DPW) planners who facilitated Saturday’s workshop.

The city uses this assessment system, called the Pavement Management Program (PMP), to determine what street repairs should be made, as well as how and when, based on a Pavement Condition Index (PCI). The higher the PCI, the better the condition of the road, with 100 being the best.

A one-time allocation of $350,000 has been marked in the city budget for repairing the worst streets in the PMP. Combined with a Community Development Block Grant of $127,720, the city has a chance to make a noticeable dent in infrastructure improvements over next two years.

Yet because the PMP has a weighted ranking, bigger streets called arterials and collectors have been prioritized over residential streets when it comes to deciding what to repair, leading many  residential streets to fall into disrepair quicker than main streets.

Amidst roadway accidents and worsening street conditions, over 20 Lemon Grove community members filled the audience at the workshop to make their voices heard as Mayor Racquel Vasquez, City Councilmembers and staff tried to tackle street solutions.

John Wood, a resident of over 30 years, lives on Central Avenue and has seen many accidents in his time there.

“It’s very unsafe,” Wood said, echoing other residents who voiced their desire for increased DPW attention to their residential streets. “I’ve brought it up for the past, you know, 10 or 15 years.”

Skyline Drive is a well-known example of an especially riddled surface. As the pavement is exposed to varying amounts of water, heat, and cold, the road’s layers that are bound together by oil become discolored, loose, and eventually hazardous.

The two DPW employees who were present at the workshop to explain these ins and outs of roadwork were Mike James and Thomas Bell. They led the City Council and attendees through a PowerPoint presentation, facilitated a walk on School Lane, and fielded questions. 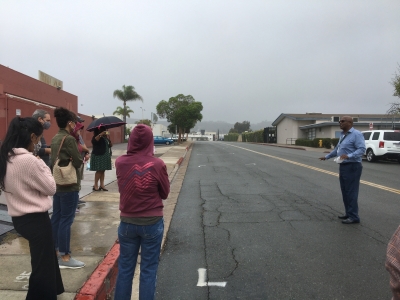 “There’s an art to paving,” said James, Assistant City Manager/Public Works Director, as he highlighted the city’s rare and cost-saving capability to pave “in-house” without always relying on outside contracting. However, for this option to be effective throughout the incoming slew of paving goals, James expects that DPW would need four or five more crew members and a wider paver.

In light of the city’s allocated funds and grant money, James then laid out a staff recommendation to the City Council for which repairs to address first, focused on streets with a PCI of less than 25: Buena Vista Avenue, Calvocado Street, and Taft Street were recommended to be addressed with this round of money.

Still, there are another 83 sections of roadway that are in critical condition with a PCI of less than 25 — which could cost the city over $10 million dollars to fix. Future funding possibilities include more grants, one-time funds, and a local sales tax or bond.

Residents had concerns on Saturday after being presented with the PMP overview and the staff recommendation. Commonly voiced issues were that it would be less expensive to focus on repairing small issues before they become bigger, and that going forward, a prevention mindset should be followed.

During the field walk portion of the workshop, resident Larry Crano gestured to a crack and asked, “If this street wasn’t going to be dealt with this coming year, why wouldn’t you just fill that so water can’t penetrate down in there and start to create more and more cracks and potholes? It’s like a cut. I know a Band-Aid doesn’t fix everything, but if you don’t put a Band-Aid on a cut, it gets infected.”

While James agreed, he and Bell affirmed that DPW has to spread itself thin when it comes to those kinds of maintenance issues if bigger projects are to be undertaken. 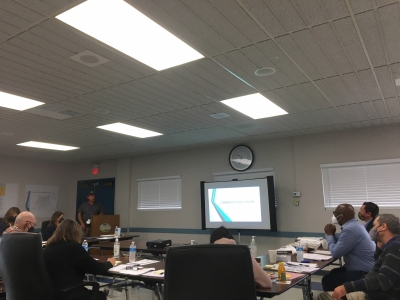 The section of School Lane that Saturday’s participants walked on would hypothetically cost over $250,000 for a full depth reconstruction, not including any contracting. If smaller repairs are made to the section before it gets to that point, the city can pay just ,$5000-$30,000 instead, according to DPW estimations.

All four City Council members also participated in the workshop and voiced concerns of their own while also clarifying details for the attendees.

Councilwoman Jennifer Mendoza asked for greater communication between DPW and utility companies like SDGE, so that newly paved sections of Lemon Grove aren’t weakened at all by other construction projects. She also urged residents to be the “eyes and ears” of DPW, so that as many maintenance issues can be addressed as possible. 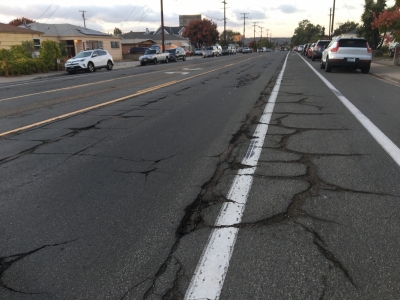 Councilman George Gastil added that the winter is a good time to seek outside help if needed, since it is a slower time of year for contractors.

Liana LeBaron, the newest Councilmember, affirmed that the City Council is involved in determining how data flows in and out of the PMP, reminding the panel that they have a say in what is prioritized by the system.

Likewise, Councilman Jerry Jones proposed a tweak in the PMP that would adjust for weight and traffic levels on all streets.

LeBaron also urged attendees to hold the city accountable to its project timelines, noting that by the end of fiscal year 2021, 32 street sections should have been addressed.

The workshop came to a close with the idea of “Complete Streets” in Lemon Grove, which is a nationwide policy approach to create a safer and more equitable future of urban planning. That means more sidewalks and crosswalks, separate bike and bus lanes, accessible crossing features, and landscaping. 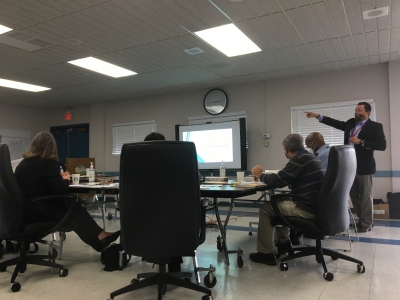 The vision is to gradually implement these changes in infrastructure that in turn affect behavior, in order to systematically improve the country’s transportation network. Still, it remains to be seen how much promise Lemon Grove leaders can fulfill with the resources at their disposal.