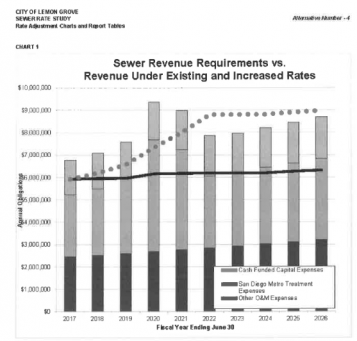 Onboard with enviro agreement to purify water

February 16, 2017 (Lemon Grove) -- The City of Lemon Grove unanimously voted on February 7th to take a wastewater rate increase and reserve allocation to public hearing.  The move supports an agreement between the environmental community and City of San Diego’s Pure Water Project to filter sewer water into drinkable water. The relationship of the agreement in coming years is unforeseen.

The 5-0 vote initiates proposition 218 notice of public hearing requirements.  Property owners will receive a notice for public hearing for the 5.75 percent rate over the next 4 years to maintain a 40 percent reserve as a flat rate.

“I am in agreement for a fact sheet (presented in public hearing) to outline the numbers,” said Mayor Racquel Vasquez. “My preference is to support a rate that is steady. Although we charged 3.75 percent in other years, I think the rate of 5.75 is appropriate.”

“The contingency is $15,000 every year.  Projecting revenue is insufficient, as $800,000 to $3.2 million is the expected shortfall projected over five years. If there is no rate increase, the reserve goes from $14 million to $5 million,” said Greg Henry of NBS. “Capital costs push over the line of current revenue.”

Meanwhile, the Pure Water project carries a hefty financial responsibility. The 10-year capital improvement plan total for the project is estimated as $392,049,294, according to a City of San Diego Public Utilities Department Jan. 13 memo.

Henry continued, “Three percent of assets is a standard inclusion rate stabilization and $3.7 million is for the Pure Water reserve. With a massive capital project, there is always risk of costs. It makes sense to have something in reserves in case something happens.”

During three of the four years of the rate increase, the reserve will be slightly lower due to the Pure Water Project, he said.

California codes require fees collected for connection to be in a separate reserve for specific purposes. Additionally, the proposition’s Right to Vote on Taxes Act stipulates sewer rates or funds must not operate with a profit and equal to cost of each parcel. Since different parcels exist, a different rate is set for each home.

“If a sufficient number oppose, 3,409 protests would be required to not go forward with rate increase,” Henry said.

Councilmember Jerry Jones weighed in stating, “The plan I see here takes enough of an amount into consideration, and is based on the capital cost that we see coming,” he said. “We have attached our wagon to San Diego. Point Loma is the last ocean discharger not on secondary treatment in the U.S. We have been dodging the three and a half million-dollar upgrade for a long time. Times are changing folks and we have environmental concerns.”

Opting for another option, he added, “There is a lot of uncertainty… There are cities that are in the middle of reviewing their rates, so they will not be in financial trouble.”

“I am a firm believer in not raising costs,” he said. “The City of San Diego has awarded two design contracts for Pure Water, and as of now, this is the most accurate expenditures with a possibility of higher costs.”

“We do not want 51 percent of people to oppose this,” she said. “Really, our hands are tied here…A constituent called me today and said do we have to do this? Yes, we do. We cannot go on as business as usual.”

Per the agreement with San Diego and the environmental community there is recognition for, “The Congressional Act that created the Clean Water Act – a secondary equivalence and a permanent waiver for Point Loma in 2019.

“We have asked San Diego if we do not secure secondary equivalence, will you continue with Pure Water, and they do not have an answer. There is going to be a change in this relationship in 2019.”

May 2, 2017 Board meeting second reading, adoption of ordinance