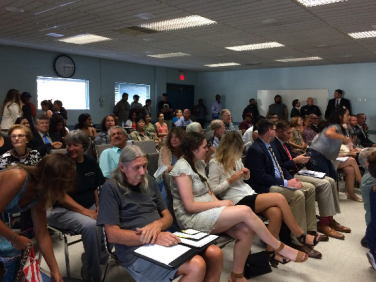 July 23, 2017 (Lemon Grove) - The Lemon Grove City Council voted 5-0 on Tuesday to deny a zoning clearance appeal for a medical marijuana dispensary in the 7300 block of Broadway because it is within 1,000 feet of two small daycare centers, one on Broadway and the other on Citrus.

One daycare was offered money by a representative of the dispensary to move, while the other, according to testimony provided at the meeting, cannot be found even by residents in the building where it exists.

Most cities reportedly do not include these small, unregulated daycare centers with 12 or fewer children as sensitive sites with regards to dispensary zoning.

Councilman Jerry Jones voiced support for the inclusion of small daycares as part of the zoning clearance process, saying, “It doesn’t matter if there’s three kids or 25. I can’t make any other choice than to protect the children.”

East County Magazine was told by multiple individuals close to this process that including small daycare centers was done at the behest of City Manager Lydia Romero.  In response, Romero told East County Magazine, “The provisions of Measure V were followed as written.”

Romero said at the meeting, “For us to obtain the list (of these small daycares) we had to assure that we would keep that list confidential and that we would not share it with the general public.” 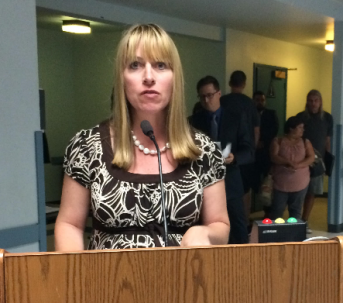 Cynthia Morgan Reed (photo, right) asked the City Council on behalf of the applicants to amend the ordinance to not include small daycares as part of zoning clearance, but the City cannot make changes to the ordinance for the first three years, per Measure V.

Evan Johnson, concerned about including as sensitive sites such confidential locations, testified, “On the face of it, it’s unlawful, private information in a public process. That’s a contradiction.”

Mendoza also apologized to dispensary applicants who claimed there were problems with the application process, saying, “If our process was initially laborious or confusing, I apologize, but this is new territory for our city, and our staff tried to do the best job possible.”

Development Services Director David De Vries contests the notion that dispensary owners didn’t know about the daycare. “One daycare center was harassed and offered money to move her daycare,” he noted.  “The letter contends that she was contacted on March 18 when the applications weren’t available until March 20.” 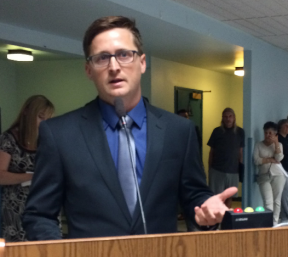 Marty Franks (photo, left), who testified on behalf of the dispensary owners, stumbled when Mendoza questioned him about his interactions with the daycare owner, and claimed he couldn’t remember the situation and would have to do more research before commenting.

Donna Lynn Clabby testified against the zoning clearance for the dispensary on Broadway, saying, “I love your city staff and I hope that you will follow the recommendation that they have set before you (to deny the clearance). The staff is paid out of the budget they serve our community and looking at those Little Leaguers tonight …I am thinking of what kind of city that my children grew up in. I hope they have that same city that they grew up in. This is not good for our city and I hope that you will follow your staff’s recommendation and listen to your hired attorneys because they will guide you right.” 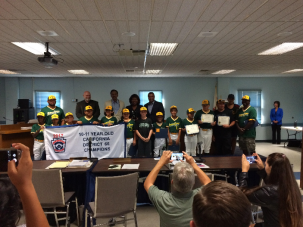 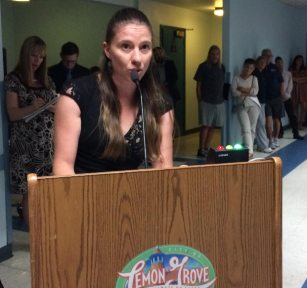 ara Velasquez (author, photo left), author of Measure V, testified that the City misled voters by claiming Measure V would allow for 15 dispensaries when the true number is closer to 3.

The City Attorney responded to Velasquez’s criticism, saying, “The difference is that staff thought they knew how many there were, but they didn’t learn about these smaller daycare centers from the state until later. No city regulates small daycare centers because the state has decided they don’t want the local jurisdictions to limit them.”

Dana Stevens, Executive Director of Communications Against Substance Abuse (photo) testified, “I want to support the recommendation from city staff to reject the application because 1,000 feet is 1,000 feet, whether you know about it today or yesterday; your ordinance clearly states 1,000 feet.” 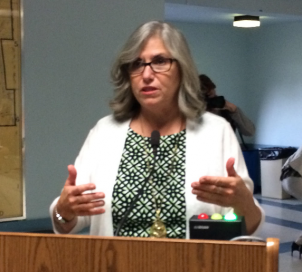 Stevens continued, “If you allow them to violate your ordinance how will you ever stand your ground with application and with other applicants?” 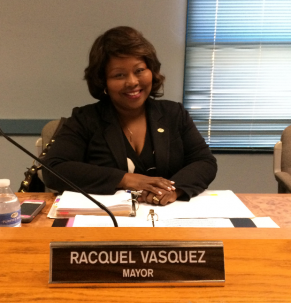 Mayor Racquel Vasquez (photo left) concluded that the Council must follow Measure V and deny the zoning clearance, saying, “I know that we all have our own personal opinions about marijuana. But then we have the law. And the law for the City of Lemon Grove is Measure V. As elected officials we are bound to uphold the law. And when I look at this map and I see the property and according to the law the law states that no daycare facilities within 1,000 feet, it is our obligation to uphold the law regardless to how we feel personally about whether or not medical marijuana should be available within our community, our city.”

The other two zoning clearance appeals also on the agenda were continued to August 15 by request of the applicants.

Applicants who have their zoning clearances denied are not allowed to re-apply for 12 months.

Also at the meeting, the Council voted 5/0 to approve the second reading of allowing of light manufacturing, brewpubs and wine bars that was covered in its first reading by East County Magazine here.

The community heard several reports from San Diego State’s Sage Project, the full reports of which can be found here.