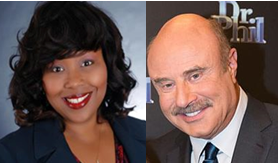 “Thanks to the intervention of Oprah Winfrey, whom I met at a Democratic Party fundraiser, we’ve arranged for Dr. Phil to counsel our council and restore civility and civic trust to Lemon Grove," Mayor Vasquez announced in a press conference at the city's landmark lemon.

Dr. Phillip McGraw states, “People are used to being coddled.” But he adds, “If you want more, you have to require more of yourself. Sometimes you  make the right decision, and sometimes you make the decision right.”

To help officials and staff do the right things, Dr. Phil says he will first administer his personality test to determine each participant’s personality type, such as porcupines, posers, chicken littles and whiners.

He admonishes those who feel wronged to “get over it.” Then learn to eliminate negative thoughts, take responsibility for their actions, accept the need for change, and set goals for future success.

Dr. Phil’s bill will be paid by a generous donation from the Foundation to Mellow Out Lemon Grove, a newly formed nonprofit formed by marijuana dispensary owners.

Councilmembers initially balked at the idea, particularly when told the session would end with everyone wearing peace symbols, joining hands and singing Kumbaya on the Oprah show.

But with election season coming up, all ultimately agreed to give it a try, heeding the words of Mayor Vasquez” “Let’s take those lemons life has brought us and turn them into lemonade to make Lemon Grove thrive!”

I've been forwarding these April Fools Day articles around. SDSU Professor Geoge Gastil replied on the article about the City in which he, until very recently, served as Councilman:
"Great story about LG...but maybe too over the top where it says they actually could agree to get help." On Tuesday, Council is scheduled to appoint Gastil to the Lemon Grove Garden Council.