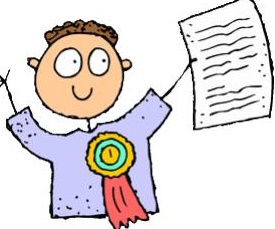 May 18, 2016 (Lemon Grove) -- The Lemon Grove Historical Society takes great pleasure in announcing five winners in its 2016 Bobby Carroll 8th Grade History Essay Competition. All are from Lemon Grove Academy for the Sciences and Humanities and were mentored by History teacher, Frank Wulftange. The topic was "Achieving Virtue and Freedom in a Democratic Republic Form of Government."

First Prize: Tori Gonzalez for her expressively written grasp of the balance of powers in America's foundational documents, her originality, and her ability to structure her essay with logic and clarity, using as her inspiration James Madison's quote, "The advancement and diffusion of knowledge is the only guardian of true liberty."

Second Prize: Mulki Abdirahman for her excellent analysis of quotes from Benjamin Franklin, Thomas Jefferson, George Washington and James Madison related to America's early government and its many challenges, her ability to link 18th and 21st century concerns about the nation's moral fiber and identity and her warm espousal of personal responsibility

Third Prize: Duong Anthony for his insightful grasp of the conflicts inherent in personal freedom and the need for social cohesiveness fostered by a central government, stemming from his analysis of Benjamin Franklin's quote, "Only virtuous people are capable of freedom; as nations become corrupt and vicious, they have more need of masters."

Honorable Mention: Deja Bowen for her principled, articulate discussion of the personal versus the public and the individual versus society, and her analysis of governmental powers and the need to protect and defend American liberties as expressed in James Madison's quote.

Honorable Mention: Israel Tiscareño for his wholehearted involvement in issues of "freedom and fairness," his use of difficult topics such as North Korea and the Somalian failed state to make his points about constitutional balance of powers in the pursuit of happiness.

The jury panel included Robert Hodges, Donna Lupinacci, Sylvia Wallace and Helen Ofield, all of whom have backgrounds in education. Jurors were unanimous in their praise for the overall quality of the entries, which demonstrate the success of the school district's emphasis on the "persuasive essay" format, critical thinking, and fostering of wide-ranging interests in students poised to move on to high school.

The Historical Society is grateful to Mary England, a former 12-year Lemon Grove City Council member and current executive director of the La Mesa Chamber of Commerce, for endowing the competition in memory of her late son, Bobby Carroll. She will present the awards in tandem with Historical Society president Helen Ofield.

The Historical Society further expresses appreciation to the teachers, staff, administration and governing board of the Lemon Grove School District for their vision and dedication.