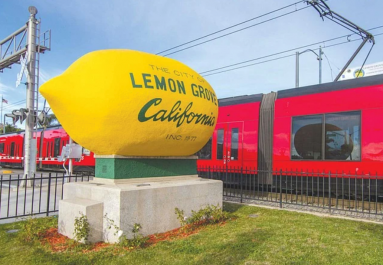 April 20, 2021 (Lemon Grove) – The City of Lemon Grove is one step closer to updating its General Plan. To date, it has hosted multiple virtual webinars, presented the Plan to the City Council and surveyed members of the community.

Although there are seven elements that make up the General Plan, the main issue residents and councilmembers are focusing on is the Housing Element. This section identifies the types that are most needed and in demand. It also estimates the funding required to provide the needed units. The deadline for the Plan’s approval is August 2021.

Taking survey results from residents into consideration, Community Development Manager Noah Alvey and Mayor Raquel Vasquez, along with the Board of Councilmembers, co-hosted a virtual meeting last week to discuss further housing plans. Two surveys had been sent out to residents of Lemon Grove as a way for them to express their needs and priorities in response to the plan the City had issued. One was web-based and the second was a scientific survey conducted by FM3 Research, which specializes in insight surveys. As opposed to the first survey, the second was sent to residents by email and could only be taken once with a personalized link.

Richard Barnard, from FM3 Research, presented the results of his company’s survey, which provided the highest priorities of participating residents.

A large part of the meeting and survey was dedicated to “mixed-use development;” a term only two-in-ten survey participants claimed was familiar. According to Barnard’s presentation, mixed-use development refers to a real estate development project that includes two or more types of uses, such as shopping, offices or housing all located on one site. These kinds of developments are typically seen near business districts, downtowns or major transit stops. Such areas promote pedestrian-friendly features, such as plazas and sidewalks.

After discussion and clarifying the term, three quarters of the survey participants were in favor of this idea resulting in a slight majority highly prioritizing this development in downtown Lemon Grove and commercial areas along Broadway.

Other conclusions from the FM3 Research survey suggested that more residents would like to see the City require developers of new multi-unit housing to include enough parking, community benefits and infrastructure improvements. Councilmember Jennifer Mendoza suggested a solution to potentially improve the parking issue.

“I think we need to make sure that we're not restricting parking in Lemon Grove unnecessarily – There are a lot of red zones painted in Lemon Grove and are those really necessary?” Mendoza proposed the idea of allowing parking on some of these curbs during permitted/safe times.

Additionally, FM3 Research survey showed residents would like the City to incentivize developers to provide more housing that is affordable for seniors, veterans and individuals with disabilities.

When asked to comment, Councilmember George Gastil emphasized his focus on strategy and getting the most housing out of the land the City allocates towards new housing. “If we’re going to give up land, I want to have a lot to show for it.” He believes this is the best financial option and is in favor of more residents moving into the city by allowing as many units as possible to be built. He further mentioned how getting the kind of community they desire is also a priority.

Mayor Pro Tem Jerry Jones was not surprised by the results of this data at all and agreed with Gastil. Jones is aware of residents not being in favor of multi-unit homes being built near the Massachusetts trolley station, but believes it is the most practical project despite the parking issues it might cause. He also emphasized his concerns for homeowners and the investments they have made in their community.

“Lemon Grove has a high owner occupancy and homeowners have a right to expect that their investment will be protected and I feel like it is my job to protect their investment from the state if need be,” said Jones. 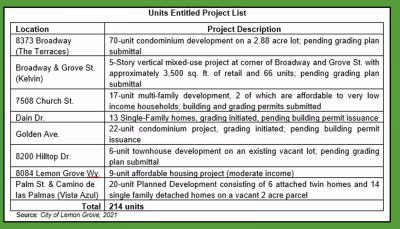 Councilmember Liana LeBaron then asked about the status of the current building plans that are pending approval. Below is an image that depicts Lemon Grove’s Units Entitled Project List. This list shows the projects that are in progress of being fully approved in order to begin construction that will not require rezoning.

With all comments taken into consideration, the City of Lemon Grove will submit its General Plan to the California Department of Housing and Community Development for a 60-day review.  A draft plan of the Housing Element is expected to be posted in July. Below is a schedule depicting the timeline for the General Plan.