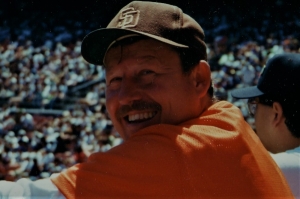 June 16, 2021 (Lemon Grove) -- Not all are reciting “Moderna, "Johnson & Johnson," or “Pfizer” when asked what COVID-19 vaccine they received. Some are answering “NovaVax.” But very few. Only 2,000 Americans participated in the NovaVax COVID-19 vaccine clinical study. An East County man was one of them.

Lemon Grove resident Edgar Gore, Jr., 63, has had two doses of NovaVax’s COVID-9 vaccine, administered during the company’s clinical study. Thus far, the NovaVax vaccine has not been approved by the Food and Drug Administration for use in the U.S., though it may be in the future.

Gore stated he had no reactions after the shots but a woman in his same study said she broke out in hives. The doses were broken down into groups who got the authentic vaccine and those who got a saline solution dose.

Can he say he is vaccinated? Gore, a long-time Padres fan was able to show his NovaVax paperwork at Petco Park recently.

“It’s recognized at Petco. I sat in vaccinated areas during the last homestand. I have all four games this weekend,” said Gore of recent homestands.

Since businesses set their own rules on how to verify vaccination, however, it’s unclear whether an unapproved vaccine will be recognized at other venues.

How was he chosen for the study?

“I answered a Facebook ad offering a study for COVID. I had to qualify by answering questions about my health, age, etc,” said Gore. “The screener explained the study by telephone. I explained that I had symptoms previously that aligned with COVID-19 on February 27th through early March 2020. As I wasn't tested, it was irrelevant in my screening process, I believe I qualified as I answered the ad early and was over 60 years old. I referred a younger friend who was rejected.”

What motivated Gore to take chances this particular COVID-19 clinical vaccine study? His personal experience. He said being sick with a likely case of COVID-19, though unconfirmed, persuaded him to join the study.

At that time, he was a sub-contractor in the grocery business—on the frontlines for exposure. He was witnessing employee after employee go out with what is now known as COVID-19. Since NovaVax was the only vaccine he, or any of us, had access to at that time, he signed up.

His personal history set him on the path as well. He took a cruise and flew back from Tampa, Florida via San Jose the fall of 2019. That connector flight had many passengers coming from Seattle, an early entry site for COVID-19 into the United States.

Gore sat smackdab on a flight full of coughing, sneezing passengers. He became so sick shortly thereafter that he was out for a week. Gore believes he had an undiagnosed case of COVID-19.

Early in 2020, getting tested for the novel coronavirus was almost impossible.

“I think maybe if I had a confirmed case of COVID-19 prior, I may not have qualified,” he said.

He received “two doses exactly, 21 days apart. I have given blood samples on three visits,” he continued.

His education and curiosity set him on a path to research before he participated in the clinical studies.

“I have a B.S.  in Biology focusing on human anatomy,” Gore told ECM.  “So, I understood how NovaVax worked and approved of NovaVax's non-use of human fetal cells in their manufacturing growth process. They were ahead of the learning curve on the UK variants, so their efficacy rate is high.” Moths were also used by NovaVax to develop the vaccine.

NovaVax is a biotechnology company that is developing a next-generation vaccine for series infectious diseases. according to a statement issued April 5, 2021, from the company. The company announced the initiation of crossover arms in two ongoing clinical trials of NVX-CoV2373 – the company’s COVID-19 vaccine candidate.