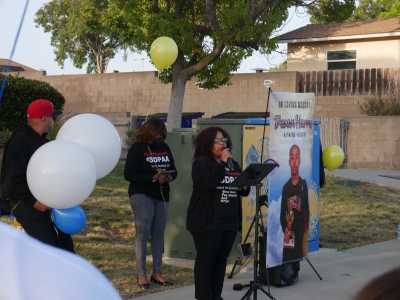 May 5, 2022 (Lemon Grove) — Tuesday, May 3 at 6:50 p.m. marked exactly three years since Trevon Harris passed away, after he was struck by a vehicle on San Miguel Avenue in Lemon Grove. He was just 13 years old.

Led by Trevon’s mother Tanya Harris, his family, loved ones, and fellow community members came out to mark the occasion and celebrate his life. Following a prayer spoken by his grandmother and short speeches from his former basketball coaches, teammates, friends and family, a release of white, blue and yellow balloons was coordinated at the exact time of his passing.

“The reason why so many people continue to follow, after three years now, is because Trevon made sure that he left something,” said Tanya Harris. “He made an impression on people’s lives.”

Since the fatal accident three years ago, a 3-on-3 basketball tournament has been established in Trevon's honor, to commemorate what was one of his greatest passions. He and his mother would travel up and down the coast playing tournaments after he made the regional travel basketball team. At the vigil on Tuesday, she remembered him talking about how he would someday buy her house after making it to the NBA.

Trevon’s coaches who spoke at the event remembered him as an excellent listener, and a player with strong promise. His former teams now play with patches on their uniforms that show his initials.

“I pray that I never have to put any more patches on our uniforms,” said Coach James, who also acknowledged the strength of Trevon’s community and its role in building his character.

The 3-on-3 event has not ran in recent years, but co-organizer Chris Williams announced at the vigil that it will be back this summer, to take place on June 11 for ten to sixteen year-olds. 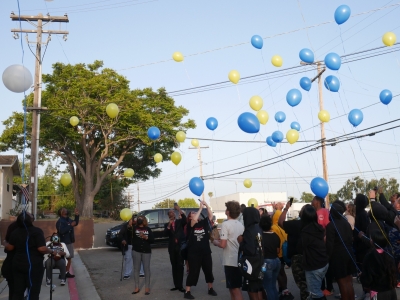 Several other steps have been taken to further memorialize Trevon, which Harris proudly informed the crowd of at the event.

A newly released book entitled “Kicks,” by author Van G. Garrett and illustrator Reggie Brown has been dedicated to Trevon, citing the young boy’s selflessness and love for shoes. Brown will be at the upcoming 3-on-3 event to sign copies of the dedicated book.

At Empower Language Academy, Trevon’s former school, an award is in his name. While enrolled there, he studied in a Spanish-language immersion program and got straight A’s, while also focusing on basketball.

A new crosswalk has also been planned for the section of San Miguel Avenue where the event was held and where the accident occurred. As the vigil progressed, cars sped past on the street, often cited by residents at City Council meetings as in need of repair.

Harris and other family members wore shirts at the vigil that read, “Justice for Trevon. While in a school zone, slow down, pay attention, and stop,” abbreviated as SDPAAS.

Harris hopes to grow the shirts and slogan campaign and spread awareness about safety on the roads across the country and around the world.