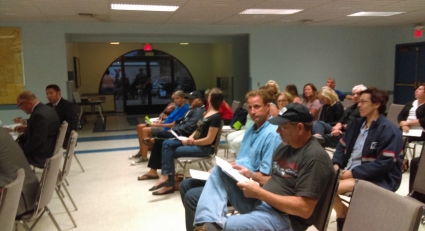 The measure supports a White House initiative that aims to bring together immigrants, refugees and other residents to build welcoming communities that help all residents thrive and fully participate in the community.   Participating communities can receive tools and resources to assist them.

About 19 percent of Lemon Grove’s residents are from other countries, according to the 2010 Census, including people from nations in Africa, the Middle East and Mexico.

But Roger Ogden, a San Diego resident, chided the Council during public comments, “You would think that a city that had 9/11 terrorists hide in your city would be a little bit more careful.”

“Leave my family out of this,” Sessom told Ogden. She has indicated that she, her daughter and 3-year-old granddaughter received hate mail following an editorial by Ogden on Patch.com with the inflammatory title, Lemon Grove Welcomes Terror/Drug Cartel Refugees.

Ogden gave methodology recommendations for poll calculations to bolster his case against the proclamation. He claimed that non-respondents in polls that gauge support for ISIS, the radical jihadist group should be counted as pro-ISIS.

When pressed by Ed Andrade about having an official repeal of the welcoming communities resolution, Sessom replied that she has requested the issue be put on the agenda in November “so the threats to my family can cease.” 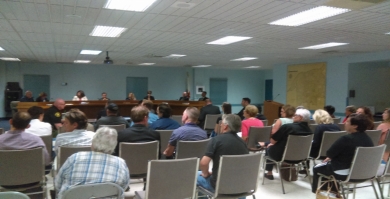 Others spoke in support of the Mayor and keeping the Mayor and the Welcoming Communities Resolution, including a pastor, a nonprofit worker and a representative from Service Employees International Union (SEIU).

One woman stated, “Jesus said love the stranger.”  She was followed by another woman whose parents were interned during WWII because they were Japanese; both support keeping the resolution.

The meeting opened to a nearly standing room only crowd, including Theresa Rosiak, running for Mayor, and Charlotte McAdory, running for one of the two City Council seats left vacant by Council members Gastil and Vasquez in giving up their seats to run for Mayor.

Approximately equal in size to the group speaking on the city’s controversial proclamation was another group, all opposed to Prop V, which would legalize medical marijuana dispensaries in the city.

Those in opposition voiced concerns that marijuana is bad for children and that Lemon Grove’s size of roughly 25,000 people does not allow it to handle an influx of dispensaries  that could occur if its criteria become  more lax than in adjacent San Diego. “Our city is too small,” one resident said.

Some asked the City of Lemon Grove to cease its affiliation with the East County Chamber of Commerce over its support of the Lemon Grove ballot initiative to regulate dispensaries.  The Chamber has since announced that its board will be reconsidering their endorsement at the next meeting, after receiving more information from the City.

One man thanked the City for its completion of an eviction of a dispensary that had opened two doors away from him. Lemon Grove has already closed seven dispensaries in 2016.

Councilmember Racquel Vasquez, candidate for  Lemon Grove whose day job is handling communication for construction in the City of San Diego, was the only Councilmember to vote in favor of the first draft.

This time, Councilman Jerry Jones voted in support, and made all three motions to approve the project by a 5-0 vote, because he had been the project’s first draft’s harshest critic but now supported it due to changes in the plans.

One neighbor asked since this developer received variances for three stories and more houses than his property zoned for three residences per acre site could have, could he also receive these exemptions?

Staff clarified on more than one occasion that tonight’s action applies only to this one development.

“I really liked what you’ve created here,” said Councilman George Gastil, also running for Mayor of Lemon Grove, a Professor at San Diego State University and Grossmont College who joined with the majority in voting against the developer’s first draft.

Gastil joined a unanimous Council to vote yes to the second proposal on Tuesday. “You’ve really created a community. That first project was just homes; this is a community.”

The new project includes bike paths, at the request of Councilmember Jennifer Mendoza. The City plans a major bike and pedestrian path throughout the center of Lemon Grove through its Connect Main Street, and has thousands of hours from SDSU devoted to the project.

The developer told the City Council that the three residents directly across the street have signed off on the project as long as no one from the new development parks in front of their house.

Vasquez asked the developer when he could have the project finished. He answered that he was not the one actually building these homes, but he doesn’t see why they couldn’t have it underway by 2017.

Like it or not it's here to stay and patients won't sell or give weed to children. Any person who wants to smoke already knows where to buy it.
And " Lemon Grove has already closed seven dispensaries in 2016."
Be glad that Lemon Grove is still a small town sized city where you can participate in and be heard by the council. I made a presentation to the City of San Diego Council and the Salary Board and was barely a speck on their radar.