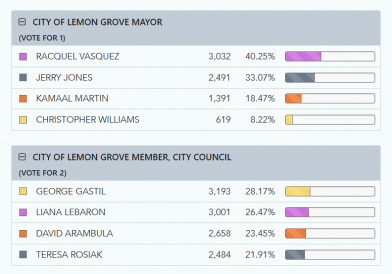 By Miriam Raftery
November 3, 2020 (Lemon Grove) – Lemon Grove Mayor Vasquez, the first Black mayor in San Diego County, appears heading to reelection with 40.25% of the vote and more than 57% of votes tallied.  Councilman Jerry Jones has 33.07%, with Kamaal Martin and Christopher Williams trailing at 18.47% and 8.22% respectively.
In the Council race, where the top two winners will be seated, former Councilman George Gastil leads with 28.17%, followed closely by Liana Lebaron, a planning commissioner, at 26.47%.  Councilman David Arambula has 23.45% and could lose his seat if those numbers hold.  Arambula has faced controversy over a civil suit alleging assault.  Teresa Rosiak, who was running on a pro-business platform, is at 21.9% so far, but this race could yet shift as more votes are counted.
At stake is the future of Lemon Grove, which faces a budget deficit and whispers of potential disincorporation.
Helping to bolster the financial situation somewhat, Lemon Grove’s ballot measure to tax cannabis is passing handily with a whopping 78%.