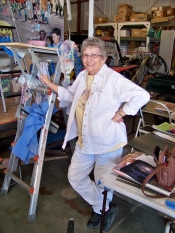 Recipients of the award have been invited to Sacramento for an awards presentation on November 20th.

In a prior interview with East County Magazine, Strzelecki said the murals were created using special high resin paints and varnish with UV protection to prevent fading.  She added that the project required extensive research at locations including the Barona Museum and the Lemon Grove Historical Scoiety.

The most recent panel includes the area’s diversity with elements representing agriculture, modern buildings and some that are gone, including an old movie theater and fire tower, as well as the iconic lemon statue.

The artists have also done other murals around town, including the Flag Day and Dog Park murals at La Mesa’s Walk of the Stars and murals at the Lemon Grove parsonage.  Their work has also been exhibited at the San Diego Museum of Man.

Strzelecki said that the murals have not been marred by graffiti, though they do have anti-graffiti protection. In addition, she noted,“It’s a respect among artists. It’s street art!”

As for the murals that have now won California’s highest award for historic preservation, LaValle said of the mural art, “It’s a lovely way to bring history alive.”

Ms. Schaller, Your comments are greatly appreciated as is Ms. Raftery's wonderful coverage. We made our forebears, the Kumeyaay Nation, a running thread through the mural. Our landscape expert, Janne LaValle, created a beautiful Tree of Life for each section to further symbolize Kumeyaay endurance. Katy Strzelecki, who painted people and (other) animals in the mural did beautiful work on the symbolic Kumeyaay family as it appeared through the centuries. In the upper lefthand corner of the fifth and final panel is a portrait of the late Jane Dumas, who died in March and was a longtime Lemon Grove resident. Mrs. Dumas blessed our efforts back in 2005 when Janne and Katy completed the permanent interior murals in the Parsonage Museum, 3185 Olive, LG, which were the precursor to the epic outdoor mural. Warm best wishes, Helen Ofield President, Lemon Grove Historical Society
I am pleased to have been alerted to read this article written by Miriam Raftery on the five murals that depict the history of Lemon Grove. They progress from the first Native American inhabitants to the Spanish, Mexican, pioneers and modern times. Even though I have not yet had the pleasure of seeing the works in person, the images from my research are captivating. Congratulations to artists Kathleen Strzelecki and Janne LaValle whose combined talents produced this colorful history lesson for all to enjoy. Most significant to this commenter, mural number one depicts the Native Kumeyaay people who have lived in the region for more than 10,000 years, and the artists' use of special high resin paints and varnish with UV protection to prevent fading should preserve their beauty to be enjoyed for generations to come. KB Schaller, author 100+ Native American Women Who Changed the World Winner, International Book Award http://www.a mazon.com/-/e/B007O46N0G