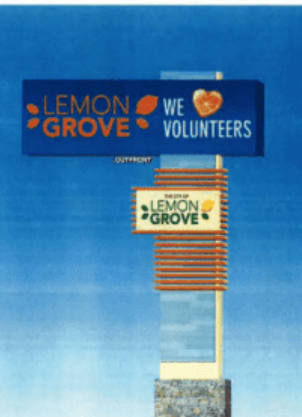 Photo: Conceptual concept of the billboard, courtesy of Lemon Grove

May 23, 2020 (Lemon Grove) -- Fiscally distressed Lemon Grove is counting on the placement of a digital billboard near Highway 94 to create a new stream of municipal revenue.

The community has long been struggling with financial issues. The city staff has estimated that the structural deficit could approach $800,000 in the coming fiscal year, exacerbated by the COVID-19 pandemic. The digital billboard is expected to bring in $325,000 or more during its first year and about $9 million over two decades, said City Manager Lydia Romero.

In October the Lemon Grove City Council approved the construction of the 65-foot-tall billboard on city property at the north side of Olive Street, south of state Route 94. The sign will be operated by Outfront Media, LLC.

“This is one of the strategies to diversify our revenue,” Romero said. “We have monetized our land.”

A ballot measure that sought to raise the city's sales tax to address budgetary needs was defeated in March, fueling concerns that Lemon Grove could one day become a part of unincorporated San Diego County.

Revenue from the digital billboard “could help to balance the city’s budget, perhaps cover the cost of improved public safety or road repairs, or pay for special events such as concerts in the park or the (city’s) annual bonfire,” said Mayor Racquel Vasquez. She noted that the lease agreement with Outfront Media calls for the removal of two double-sided billboards that she views as urban blight.

The agreement with Outfront Media, LLC provides for reduced advertising rates for city businesses on the new billboard. The company also will allow the city to post public service announcements.

Plans call for the sign to be two-sided, making it visible to both directions of traffic on state Route 94. The billboard will measure 14 feet by 48 feet and will operate from 6 a.m. until midnight. No date has been set for the sign to become operational, however.

“Right now we are in the design process,” Romero said. “We are awaiting the final submission to the city. We have to go through a permitting process through Caltrans (California Transportation Dept.)

Vasquez sees no downsides to the billboard. In addition to raising badly needed city revenue, it has the potential to draw new business to the community, she holds.

“The billboard will serve as a marker that identifies the gateway of our city, specifically the business district,” she said. “A digital billboard is a great way for local businesses to reach potential customers that travel east and west on the 94 freeway.”

The billboard isn’t without controversy, however. Businessman Christopher Williams recently was denied a permit to operate a medical marijuana dispensary near the property that will house the billboard. He says it’s unfair for the city to allow a sign that is allowed to carry advertising for cannabis products and not allow him to operate a marijuana shop nearby.

The City Council recently upheld the city staff’s denial of a permit for Williams to operate a dispensary at 3648 Olive St. The city maintains that the business is too close to Promenade Park. An article about the digital billboard and efforts to open the cannabis shop appears in the Candid Chronicle, a cannibis-focused news publication that has described Williams as its founder.

Proposition V, the ballot measure that authorized the sale of medical cannabis in the city, states that dispensaries must be more than 1,000 feet from a variety of protected uses. These include schools, daycare businesses, parks, and playgrounds.

“Unfortunately, the only recourse is to allow a judge to decide,” he said.

Stephen Browne, a member of the city’s planning commission, said he has no objection to Williams’ proposed business. However, he views the approval of the dispensary and the construction of the nearby digital billboard as separate issues.

“One has nothing to do with the other,” he said.

In contrast, Teresa Rosiak, former president of the Lemon Grove Chamber of Commerce, said Williams has a valid point.

“If you are going to advertise cannabis, you need to approve the cannabis locations,” she said.

Vasquez holds that is the denial of Williams’ application and permitting cannabis product ads to run on the digital billboard are separate issues. She said the sign will operate within the bounds of state and federal laws.

“It’s just general advertising for whatever products want to go on that billboard,” Romero said.

Several letters in support of the billboard project were sent to the city in the fall. John Boal, managing director of the western region of The Advertising Council said the digital sign could carry valuable public service announcements on such topics as texting while driving and “buzzed driving prevention.”

A letter from Marty Gorsich, CEO of the Farmers Insurance Open golf tournament, praised Outfront Media for being a strong community partner in creating opportunities to promote the Champions for Youth charitable program.

Nicole Capretz, founder and executive director of the Climate Action Campaign, wrote that Outfront Media had been one of its strong community partners.

The Rev. Peter M. Escalante of Mission San Diego de Alcalá in September wrote that that Outfront Media had been a partner in creating opportunities to commemorate the mission’s 250th year in San Diego County.

Moving Through the Approval Process

Vasquez said she has no objection to properly located cannabis businesses. Four such businesses now are working their way through the city’s approval process.

“We are just waiting for them to let us know that they have met all the requirements that are outlined for people,” she said. “My hope is that it is very soon.”

The city is seeking additional information from the business on North Avenue and awaiting the submission of a permit application for the business proposed for Broadway, Alvey said.

First it should be pointed out that many people misunderstand the separation of powers, authority and enforcement between state and local jurisdictions. Medical Marijuana Dispensaries in Lemon Grove are regulated by municipal code passed by the people with Measure V. The placement of a sign for general advertisement is also regulated under Lemon Grove municipal code. Cities must and do tread very carefully when regulating copy and content under first amendment rights. The copy in this case, which may and may not involve cannabis, appears to be regulated and enforced by the state with regard to cannabis. The operation of the sign within State law is a State jurisdiction and enforcement responsibility. Unlike title 24 regulations, which the city is obligated to enforce, the City has no enforcement authority with regard to copy and content in the area of cannabis . The placement of a dispensary and the sign are two separate issues and regulated and enforced by two separate jurisdictions. Completely unrelated issue.