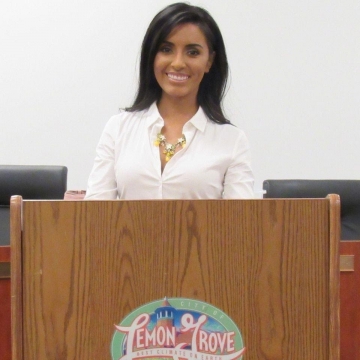 By Miriam Raftery
April 11, 2021 (Lemon Grove) – On April 20, the Lemon Grove City Council will hear a proposal that would limit councilmembers’ speaking time to five minutes per agenda item, plus three additional minutes later on.  The proposed action targets new member Liana LeBaron, who has been criticized by colleagues for lengthy comments up to 45 minutes and questions to staff that some say are rude or reflect a lack of preparation.
The Council will also consider moving some agenda items to a later date if a meeting runs past 9 p.m., three hours after the 6 p.m. starting time.
Councilmembers Jennifer Mendoza, a Democrat, and Jerry Jones, a Republican, introduced the measure.
Mendoza says meetings have run over five hours regularly since LeBaron’s election, and Council has had to schedule several make-up sessions.
The San Diego Union-Tribune reports that Mendoza said she offered to brief LeBaron on any items of interest and encouraged her to reach out to City Manager Lydia Romero.  Mendoza says if a Councilmember is not sufficiently prepared to discuss an agenda item, “it is a disservice and disrespectful to other council members, the staff and our constituents, who have to sit through endless questions and explanations that should have been resolved before the council meeting.”
Jones faulted LeBaron for grilling staff members and for taking sides with a cannabis dispensary advocate in a recent hearing based on “hearsay” not evidence.
LeBaron contends that such a rule would amount to censorship. “I think the public is going to be able to capture the essence of a councilmember attempting to be silenced,” she said. LeBaron also claimed that City Manager Romero and other staffers have not responded to her inquiries.
Imposing time limits on elected officials’ speech is relatively rare, but has occurred.  The City of San Jose recently adopted a plan limiting councilmembers to 10 minutes to speak on an item initially, followed by five more minutes to discuss or ask questions.
In East County, this is not the first time that a local board has considered whether to place limits on the actions of an outspoken council member, or muzzle their speech.
The Grossmont High School District imposed time limits for trustees to speak and infamously turned off the microphone of former dissident member Priscilla Schreiber. La Mesa’s City Council once considered requiring two councilmembers to place an item on the agenda, but ultimately rejected the idea. El Cajon’s City Council opted against a similar proposal targeting Councilman Ben Kalasho, who had sought to put many dozens of items on the agenda, but instead adopted a rule requiring two members’ approval to request that staff create a report.

To be clear Jonathan I said I do not favor the strict time limits. That is just one vote on the subject.

Doesn't the Mayor, as head of the Council, have the perogative to move the Meeting along?

The discussion, and that's all it is at this point, is not to muzzle or limit a council member's speech. It is a discussion on meeting protocols that will make getting the peoples business done go more smoothly.

If a one member filibusters a meeting, then it is not that member that's having their speech limited.

When questions and research that should have been done ahead of time are done from the dais instead, then it is not that unprepared member's speech that is limited.

The proposal by staff at the April 6th meeting was just a discussion starter with little input from the Council. At that meeting there was a robust discussion and what comes back should look very different and less rigid than what was originally presented. Limiting time does not limit the content of a member's speech. It does encourage the preparation that the public expects from us and requires the speaker to stay on pint and focused on their positions.

Personally I'm not in favor of rigid time limits when there are other tools that will have the same effect.
My suggestions will be discussed when this item comes back to Council.

No Council and no regional body I've served on allows the behavior we've experienced in the past 5 months.
Our discussion is about finding common ways for our Council to get the people's business done in an efficient and civil fashion.
And once again, what difference does it make what party two Council Members that share common goals and values are.

The mention of party affiliation was merely to show that this is not a partisan matter. (Elsewhere when we've seen efforts to rein in a councilmember's speech or ability to put items on an agenda, the other members were all of the opposite party of the person they sought to limit.)

I'd be curious to know how other local boards and commissions assure reasonable speech opportunities for all members while preventing monopolization of conversatons.

Liana has said she's had some issues getting answers from staff outside of meetings. She may wish to submit her requests in writing and document the responses.

On another note, I wish Lemon Grove would do video meetings to make them easier for media to cover.  I've had two reporters give up because with audio only, it was too hard to tell who was speaking sometimes.  For media to document what occurs at your meetings, providing Zoom video would really help.  Our nonprofit figured out how to buy a Zoom account for $150 or so a year and livestream important events on Facebook free. If we can do this, so can the Council -- any member can participate from anyplace where they have computer or cell phone access.  All other local city councils are doing this and even small boards such as some community planning groups.  It's not transparent to have audio only meetings and I doubt that meets Brown Act requirements for public access.

Yes it is the Chair/Mayor's job to move the meeting along. That can happen as long as there are the tools to do so. I've served as Chair on two regional bodies. I was SANDAG planning chair for two year with '15+ members and am the current chair of the Metro Wastewater Commission/JPA with 12 members. On both of those boards I had members that respected the chair's request to move the meeting along and conclude remarks. I experienced that on the SANDAG board of directors and at MTS where I served as an alternate. Technically no member has to release the floor unless there is protocol dictating it. It's no secret that I an long winded myself but when asked to consider others I do so out of respect. No one has been harder on me than Barry Jantz at the East County Chamber Government Affairs Committee. I comply out of respect for the process and my colleagues. Lemon Grove is not experiencing this right now to other steps must be taken in order to make sure the people's business gets done. As to the video meetings Miriam, I am with you on the video. My Metro meetings are video. I'm not sure why we do audio only but I've gotten used to it. NOt sure why your reporters have a problem. The Mayor is pretty clear about who she is calling on. Hopefully we will be back to live meetings soon.

Something addressing this issue would benefit constituents more-so than anyone else. People come for one agenda item, and if it takes 5 hours to reach that item, we've already wasted hours of their time and they have probably left by the time their item comes up for discussion anyways. But I am glad to hear from Councilman Jones in the comments here that the final version of this will not limit Councilmembers to 8 minutes per item, because that is far too short a time, at least for the two Councilmembers proposing this bipartisan change, because when Mendoza and/or Jones take a lot of time on an item it's because they are amending it and improving the govt. policies being made in Lemon Grove.