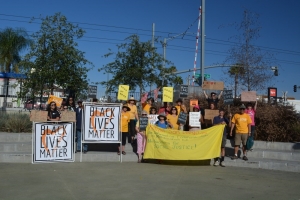 The rally, held at the Lemon Grove trolley station, was organized by Summit Unitarian Universalist Fellowship. “We were joined by members of several other groups such as Activist San Diego, Border Angels, ACLU (American Civil Liberties Union), Women Occupy and others,” said Jack Shu, spokesman for the event. Many people who drove by hooked horns or gave the group a thumbs up to show support.  Some even joined the group for a while as they walked by,” Shu added.

During Operation Lemon Drop, Sheriff’s deputies  and Metropolitan Transit officers conduct checks at the trolley station for trolley fare compliance and probation violations.  According to the Sheriff’s Department, the goal is to “identify prolific offenders and their associates, as well as seeing if offenders are linked to known existing crimes.” At a July 2014 Operation Lemon Drop sweep, 3,330 people were checked for trolley fare compliance, 100 probationary searches were conducted, and 53 people were arrested. Most of those arrested were offenders who had been re-released under the state’s prison realignment program, which shifted responsibility for non-violent criminals to the local level and resulted in early release of some due to shortage of jail space.

But protesters opposed to the sweeps contend that such operations amount to racial profiling of African-Americans.