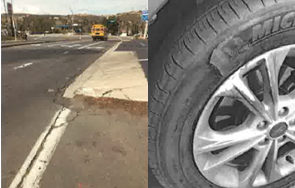 Paulette Martinez alleges that an unmanned, unfenced sharp sidewalk at 8000 Broadway punctured two her tires on January 29th. She indicates her vehicle had to be towed and that she had to buy two new tires.  She provided receipts and photos of what she contends was a poorly maintained sidewalk and roadway, as well as images of tire damage, asking for $200.98 in reimbursement. (See two of these photos, top left)

Steven Brown Barrington claims that a pothole on El Prado Avenue has caused damage to his vehicle for a month and was not fixed until February 5th.  He claims this caused damage to suspension, intake manifold, transmission, and tires among other things. He says the street was “dangerous” because his vehicle was daily being hit by flying pieces of concrete chipped away from the pothole as it became wider and deeper. He provided a photo of a repaired pot hole.

Attorney Michael Majdick filed a claim asserting that his client, Carla Pastore Hall, suffered personal injury while walking home when she tripped and fell due to a crack in a sidewalk at 7895 Golden Avenue on January 18th.  She reportedly suffered injuries to her shoulders, chest, face and head. She seeks $25,000 in damages including $7,000 in medical bills and $18,000 for pain and suffering. Majdick told ECM he does not have a photo of the sidewalk that he claims caused the injury.

No explanation of why the city rejected the claims has been provided.

In addition, Rosa Vazquez has filed a lawsuit claiming that on May 21, 2017 she was riding her bicycle near 1610 69th Street when she encountered potholes that caused her to fall. Her lawsuit has been filed against both the cities of Lemon Grove and San Diego.

My suggestion would be for all city officials, in every department, everywhere, commit to the time and literally walk the streets and visually see what's going on. Driving past at 30 mph or more is just blatant ignorance. The citizens deserve better from these highly paid employees who are supposed to work for us, the taxpayer.