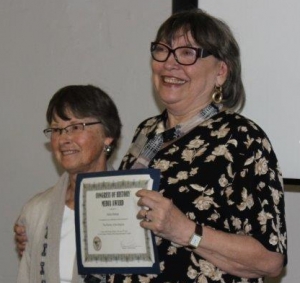 March 10, 2014 (Lemon Grove)--On Mar. 6, the 50th anniversary of its annual conference on regional history, the Congress of History of San Diego and Imperial Counties (www.congressofhistory.org) gave important awards to five present and former Lemon Grove residents for enriching and advancing the history of the region.  The Congress's vice president Louise Torio (chair, Friends of the Villa Montezuma, Inc.) presented the awards.

Helen Halmay, a Lemon Grove resident from early childhood, received the Media Award for her more than 20 years of editing Adelante, the bimonthly newsletter of the Congress of History.  Adelante is an indispensable round-up of historical activities, editorials and information that is read statewide.

Halmay's editorial and design expertise emerged in the late 1970s when she began issuing the first newsletters of the Lemon Grove Historical Society during its formative period when her parents, Elizabeth and Paul McCormick, served on the early executive boards. 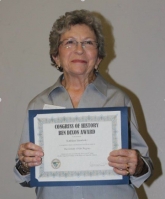 Eva Peterson, who grew up on a large chicken ranch in Lemon Grove, accepted the award for the Center.  The award honors outstanding effort in the organization and preservation of historical materials and is named for the the late San Diego County historian/archivist Mary Ward.

The Ben Dixon Award, the Congress of History's highest award for major, long-term contributions to enriching and enhancing the cultural and historical materials of the region, went to Janne LaValle and Kathleen Strzelecki, painters of the huge Lemon Grove History Mural, 3308 Main Street, Lemon Grove.  The mural, eight years in the making, depicts the history of the community from antiquity to modern times and is the city's first public art work.

LaValle, now an Oregon resident, was a former president of the Lemon Grove School Board and Soroptimist International of Lemon Grove, who resided here for many years and won renown for her exquisite landscapes and architectural paintings.  She is currently painting a 14-foot mural in the Lakeside, Oregon public library.

Strzelecki, a 22-year resident of Lemon Grove, has just concluded an acclaimed solo art exhibition, "An American Family," that was held over by popular demand in the Lemon Grove Library.  She is currently at work on a new series of portraits.

Ben Dixon (1892 - 1970), a founder of the Congress of History, was a genealogist, historian, teacher, former curator and archivist of the Serra Museum, San Diego, and author of many books and articles, among them, the Benjamin Franklin Junior Historical Series: A Bookshelf of American Genealogy. He was known for his tireless work in preserving the region's history.

In the ceremony's most touching moment, the Award of Merit was given to Federico and Lily Kellenberger of the Corredor Historico CAREM, A.C., Tecate, Mexico, whose mission is to protect, preserve, restore, and share the historical and cultural heritage of Baja California. 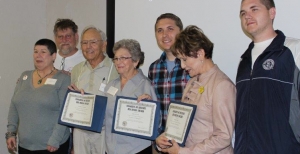 Dianne P. Cowen, president of the Congress of History, urged the audience to attend the 2015 conference (Mar. 6-7) focusing on the centennial of Balboa Park.