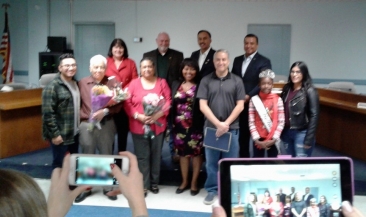 Photo: December 19, 2017 was declared Marcos’ Jewelry Day in honor of the retirement of Marcos Ortega.

Mayor Racquel Vasquez asked Amos if the public would have access to the videos, to which Amos discussed the process by which videos are released.

Councilman David Arambula wanted to know if the calls were being archived live, to which Amos responded that no, calls would be updated at the end of the day when the officers return to the station and plug in their body cameras to be charged and uploaded.

Arambula’s questioning revealed that the Sheriff’s Department declined a body worn camera that charges in the car because it could be too cumbersome to take on and off or be tethered during the shift.

The public was warned that in the event an officer feels his or her life is threatened, the first thing s/he does may not be to reach for the camera. Thus, there will still be times when footage is not available.

Once activated, the body camera saves the thirty seconds prior to it being turned on, in addition to going live.

Studies have shown that citizen complaints are often cut in half after body cameras are added, since both deputies and citizens behave better, testified the Sheriff’s Department.

Counsel to Amos testified that the data differs between jurisdictions as to the effect body worn cameras have on internal investigations.

The Council also approved a new Mayor Pro Tempore, and list of appointments. 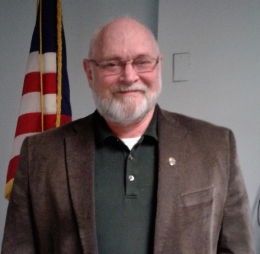 Vasquez will now serve as Council Seat on SANDAG.

Councilmember Jennifer Mendoza offered to continue on as Council Seat for Heartland Communications Fire Authority and the Heartland Fire Training Facility Authority, but Arambula assured her that he has fire training and used to want to be a fireman so he really wants the slot; Mendoza voted yes to all of the Mayor’s recommendations. 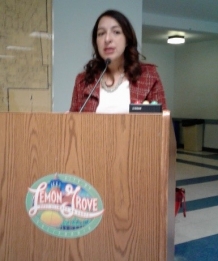 SDG&E Senior Public Affairs Manager Vanessa Garcia (photo, left) spoke of the utility company’s goals to be the safest, cleanest and most reliable power utility company and presented this Lemon Grove City Update from SDG&E and said that she pays a few dollars more each month to get 100% of her SDG&E electricity from clean and renewable sources.

Council also heard updates on community efforts to raise money for the Lemon Grove Little League. Their fields are brown after the water was turned off thanks to financial pressure during the off-season and an irrigation leak that caused a $27,568 slope failure that could have partially been prevented with a smart meter.

The Council approved a memorandum of understanding with the Little League.

Jennifer Mendoza announced that the Lions Club has raised $2-3,000 while Chris Williams told Matthew Pendleton that he had secured a $1,000 contribution. Williams also testified during public comment that the City wouldn’t take his $1,500 for a conditional use permit and complained that he and the media were misled into believing they had passed zoning clearance for a medical marijuana dispensary.

According to City Manager Lydia Romero, Lemon Grove can commit to paying $1,440 for an irrigation audit immediately and staff can come back with a plan to pay the Little League’s $3,303 outstanding water bill at the January 16th meeting.

Council seemed reluctant to fund $26,083 in turf maintenance but offered to call on City Cleanup volunteers to help get the fields in shape for the new season and suggested naming rights in exchange for annual maintenance fees, to which Matthew Pendleton replied that four of the five fields are as of yet unnamed.