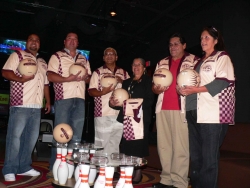 The new facility features 12 lanes as well as a microbrewery bar and more. “You can bowl, play pool, and there are gaming slots,” said Bobette Brown, spokesperson for Viejas. “It’s getting away from the old smoke-filled lanes to a more boutique bowling alley.” Leagues are forming, with league bowling starting after the first of the year, she added. 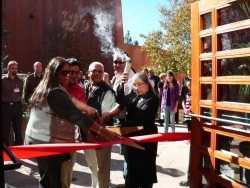 “We are excited about this new addition in the entertainment lineup here at Viejas,” said tribal chairman Bobby L. Barretet. “Viejas Bowl will be casual, but upscale and will provide a new, affordable entertainment option for families in the area.”

Viejas CEO Lyn Baxter said Viejas Bowl is the tribe’s latest move toward creating a “true lifestyle center at the Viejas Outlet Mall.” Baxter noted that the trend is being followed by many traditional retail centers in this challenging economy. But Baxter noted,”Fortunately, Viejas Outlet Center’s transformation to al ifestyle center is already well underway, with the addition of a day spa, Movies in the Park, Farmers Market and the ice rink, which has been a huge hit.”

Tribal members enjoyed an afternoon of bowling today. Tomorrow at noon, Viejas Bowl opens to the public. The facility offers birthday packages for kids as well as discount bowling on Sundays.
For more information, visit www.viejasbowl.com.