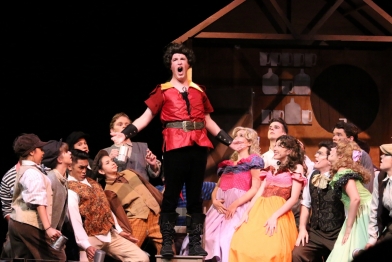 July 9, 2016 (La Mesa) - Did you ever want to be a Disney princess as a little girl? According to Isbella Lenhoff's bio, when she was four, she believed she was Princess Belle. Many years later, Isabella is the perfect Belle. I've been watching her act for several years now and this was her best role. She is a true star with an amazing voice.

Isbella is now in college, returning to YAT to play the role. Young Actors Theatre has the distinct niche of allowing actors up to age 30 to be a part of their plays. Most youth theatre only allow students up to age 18. It is hard for talented youth to find a place for their talent.while contemplating which life roads to follow. Thanks you YAT for providing them this opportunity. 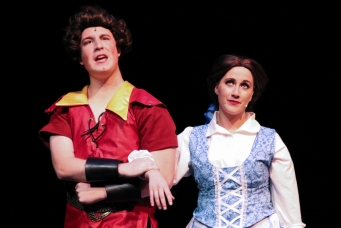 Directed by Jean Issacs and Perry Lee, this timeless tale should be put on your take-your-daughter to-do list. It provides enchantment and fun, a perfect summer treat. This production offers a memory to last your child a lifetime, spending time with her parent as magical characters come to life. A warning, however: the play version of the story does have added songs, to the dismay of my niece. When you know and love the Disney move version by heart, to throw in something new can disappoint. The added songs clarify motivation. But if Disney didn't need them, do we?

Josh Powers makes his Young Actor's debut.  He played the beast. When he sang, his songs would start softly; by the end of the song he reached where he needed to be, quite powerful. He needed to start in this place and then build. Perhaps itwas just nerves, but this would have made him more masterful.

Johnathon Michel, as Gaston, did not have this problem. The audience loved him. He was like the Gaston we all know and love, especially when he sang.  His and Kevin Dobson’s role as Lefou, were  played very much like the movie version, cartoony and fun. Dobson is taking the role a bit too far and could have toned down a notch. 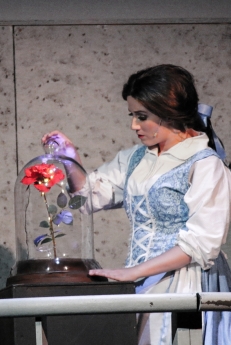 Kaari McBride is an audience favorite as Lumiere, funny and lovable. Loraine Odiermo brought Mrs. Potts to life, rendering an endearing version of the song Beauty and the Beast. Russel Clements made a great Cogsworth. Baillee Coleman delivers another wonderful job as Babette.This was a huge enthusiastic cast, creating a delightful family show.

The orchestra started out with a few sour notes but by the time the show had started had no more discord, blending into the background and providing the live music  Add in the majestic castle set,  the close-to-movie costumes and the magic happened.

Make some memories for your family next weekend. Let your daughter dress up like Belle, and come out to The Joan Kroc Center. Your child can even meet Belle and the cast after the show in the lobby, for pictures and autographs.

11 am performance on July 13th