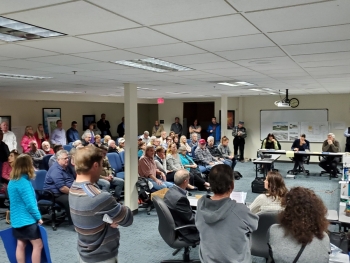 Debbie Beyer, Literacy First Director, faults planning group for not allowing rebuttal testimony. “They got it so wrong,” she says.

With the January vote, the next step for Literacy First will be a vote by the Valle De Oro Planning Group on Feb. 4 at 7 p.m. at the Otay Water District Headquarters meeting room. After this vote, the proposal goes on to the San Diego County Planning Commission on a future determined date, and then on to the San Diego Board of Supervisors.

Some 150 local residents packed into a room at the Otay Water District Administration Building in Spring Valley, with the vast majority expressing concerns that the proposed project could severely and negatively impact local traffic. Nearby Valhalla High School ,with its 2,125 students, already impacts traffic in the area, especially during early morning and afternoon hours.

The proposed 48,000 square foot school campus called Liberty Charter High School would consist of a two-story building with 22 classrooms for up to 450 students, administrative offices, a gym, patios, and a football field. A parking lot with 161 spaces would also be built alongside the building.

A complete library of documents regarding the proposed high school can be found on the County of San Diego website at tinyurl.com/LibertyCharterHS.

The new charter high school would generate at least 600 more trips in the area, according to a traffic engineering study commissioned by Literacy First in 2014, when the charter school organization acquíred the land from the CalTrans. Mark Linnman, a project land consultant hired by Literacy First, said during the meeting that a third lane would be built on the eastbound side of Chase Avenue leading to a one-way driveway onto the school property.

Numerous residents testified that they believe the school is a "right project in the wrong place."

However, several current Literacy First parents affirmed their support for the project, sidestepping the overall building issue being discussed.

Valle De Oro Planning Group Member Michael Herron at one point stated, “From what I’m hearing I think we need to recognize the area’s traffic problem before we look at any high school.”

Besides the traffic concerns, residents also expressed concerns about the school's location adjacent to a vaping lounge, a liquor store, and a convenience store across from the proposed high school. School officials said that the campus would be in a "locked down" state as opposed to an "open campus.” 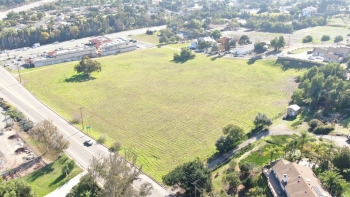 A “Mitigated Negative Declaration” (MND) was issued and published as a legal notice for the project in mid-December as required by The California Environment Quality Act, also known as “CEQA.”. A “MND” is a declaration prepared for a project when the initial study has identified potentially significant effects on the environment, but the effects no longer pose a concern.

Also throwing its weight into the fray is the Grossmont Union High School District (GUHSD), which submitted a four-page letter from the district’s law firm, Best Best & Krieger, to Denise Russell of the San Diego County Planning and Development Services on the day of the first vote. The GUHSD expressed concern that the project from an environmental aspect would be located approximately 3500 feet of Valhalla High School. “The District’s paramount concern is the safety and security of these students. To that end, the District notes that the MND makes only one mention of Valhalla High School and contains virtually no analysis of the project’s impact on the District’s students or facilities,” the GUHSD letter states.

Literacy First is facing a crunch of reality in that their lease ends in two years on a property in Lemon Grove which now houses its high school.

Literacy First Executive Director, Debbie Beyer expressed frustration that the Valle De Oro Planning Group was not able to consider her rebuttals to some of the information discussed during the meeting which she felt was incorrect. In an interview with 10News, East County Magazine’s news partner, Beyer said, “We want to be good neighbors.”

Beyer said that Literacy First purchased the land for the proposed high school from the Cajon Valley Union School District for $14 million, after acquiring it from CalTrans when the agency cancelled a project related to State Highway 54, also known as Jamacha Road.

Beyer told East County Magazine after the Valle De Oro Planning Vote, “They got it so wrong.”

She says the planning group didn’t understand the scope of Literacy First’s proposal. “It was kind of like a lynch mob. I get it that a lot of it is because of traffic. The traffic in that intersection is a mess to begin with. It is incomprehensible for most people to understand is there can be other ways for things to work,” said.

“We purchased that land with cash money five years ago. So we have been in this process for five years to build a high school. We’ve been doing everything the San Diego County Planning Commission has asked us to do to the tune of hundreds of thousands of thousands of dollars,” Beyer added. “We have done every kind of study imaginable under the sun….air, wind, water, traffic.”

While Beyer acknowledges that the original study of traffic impacts was done in 2014, she notes that it has been updated twice. She says that the students who now attend high school do not live in Lemon Grove, the site of Literacy First’s high school. “Our kids live in East County. Our feeder schools are in El Cajon. That’s where are kids [who would be attending school] would be coming from.” As for critics, she stated, “Their arrogant attitude is that ‘there are plenty of high schools. Why don’t they go one of those schools?”

She continued to say that Literacy First has developed a small comprehensive high school “that has everything you would want in a high school.”

The concerns about additional traffic problems are not warranted, Beyer says, as Literacy First will be bearing the cost of creating additional eastbound lanes including turning lanes into the school and sidewalks.

“Our school is a formal learning environment with a closed campus. Kids are ordinarily dropped off there or walk there. We have a uniform code policy so that they are easily identifiable,” Beyers says. “They are not going to be running loose at lunch, before school, or after school.”

Beyer feels that for some residents it may be difficult to “comprehend that all high school kids don’t act the same. Our kids aren’t perfect, but it is not the same environment because it is small, kids are known, and because our program is a different kind of program you are not going to see the same sort of behavior.” She acknowledged that there might be a few students who would walk down to the 7-Eleven convenience store nearby and there could be some issues. “This wholesale thing of kids running wild and drinking alcohol and vaping or running getting porno at the 7-Eleven – it was like the mob working themselves into a frenzy.”

Beyer dismissed any problem that may surface with the liquor store and vaping lounge adjacent to Literacy First’s property.

“There are liquor stores on every corner in El Cajon. There are vape shops on every corner in El Cajon. [The students] are not going to be released during the daytime. We have spoken about this with the county planning commission. There is some sort of freedom in the sense that you think there are not Valhalla [High School] kids that aren’t running by the vape shop or whatever? It’s ridiculous to think that there are kids there running and grabbing alcohol. They are minors. If they are going to be selling – they are the ones who are going to be in trouble,” Beyer said.

Beyer says that some in the community have taken the opinion that “no way are they going to build a high school.” Despite the setback at the Valle De Oro Planning Group meeting, Beyer said that they intend to follow the process towards building the high school.

“We didn’t start this to not finish this with a high school,” she said.