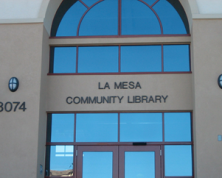 July 25, 2021 (La Mesa) – A proposal to form a task force to look at options for an expanded library will be on the agenda for the La Mesa City Council on Tuesday, July 27.   You can submit comments up to 300 words  to be read aloud at the Council meeting by the City Clerk; comments must be received by 4 p.m. Tuesdy at comments@cityoflamesa.us. Live public comments can also be made via Zoom.

The current La Mesa Library was originally intended as an interim step, after the old library was torn down to make way for a new police station. But the cash-strapped city never raised the anticipated funds for a larger, contempoary library and county matching funding evaporated. But many residents are advocating for the city to live up to its promises to residents.

The issue has sparked lively discussion on the La Mesa Happenings forum on Facebook.

John Schmitz, President of Friends of the  La Mesa Library, believes the city needs a larger library space. “Many don't realize that the existing library facility was intended to be an interim location until a much larger permanent facility could be provided,” he posted. “The library staff has been doing a wonderful job trying to serve our city without adequate meeting space, study rooms, and children's and teen's activity space. Please consider submitting a statement in support of this task force to the La Mesa City Clerk by 4 PM Tuesday.”

The La Mesa branch library is one of the most active libraries in the County’s 33-branch library system, according to Friends of the La Mesa Library. Yet it has far less space than newer libraries recently built by the County in communities such as Ramona and Alpine. Those libraries have emerged as community hubs, offering not only books and study space, but computer centers, fitness classes, musical concerts and more.

Some have voiced skepticism over the need for a new or expanded La Mesa library.  Frankie Gonzalez asked, “Is a traditional library still something we should allocate funding and resources to? Since everything these days is online and research is done from a computer and internet, how about a Science, Technology, Engineering, and Medical center. Call it the STEM Center.”

But Schmitz countered, “Contemporary libraries aren't just above books anymore, more like a community resource center. All your ideas could be a component of our library if there was enough room.”

Elizabeth Hill agreed with Schmitz, adding, “Many libraries are creating spaces for skill expansion such as 3D printing, sewing (its coming back), laser etching, Adobe software, etc. Plus people will always needs a quiet space to study and work thats not a coffee shop (where most places are, instituting a 2hr limit).”

Gene Carpenter noted, “They say you can’t judge a book by its cover. Increasingly in the United States, you also can’t judge a library’s value to its community by simply its books.” He included this link: How public libraries help build healthy communities.

Of note, a second agenda item calls for creation of another task force to enhance and promote arts and culture in La Mesa. Both items are proposed by Vice Mayor Jack Shu.