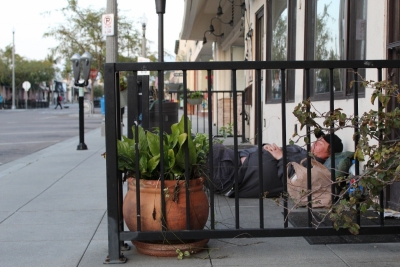 Story and photos by Jake Zawlacki

April 22, 2020 (San Diego’s East County) -- “Things are different,” said Mike, a local homeless man, as I spoke with him in downtown La Mesa yesterday. “Everyone’s afraid of the homeless.”

Mike typifies many homeless individuals living across East County with nowhere to go. The recent halt of new intakes at the East County Transitional Living Center  in El Cajon is only one example of doors closing to homeless people. Just a block from the closed Wells Park in El Cajon, you can see almost 20 migrated homeless individuals now camped in the parking lot outside of the Neighborhood Healthcare Facility.

When asked about the Convention Center and other facilities around the county being opened to homeless, he shrugged. He told me there were some churches still open, but after a confrontation with another individual he decided it wasn’t for him.

A staffer at Supervisor Dianne Jacob’s office informed ECM that the Supervisor’s office is working diligently with homeless individuals in unincorporated areas, primarily focusing on Spring Valley and Lakeside. Since January 28, 2020,  226 individuals have been engaged, 177 have been placed in hotels with 156 of those still in hotels, and 82 tents have been removed. Those numbers are notable considering the delays resulting from the COVID-19 pandemic.

As of Monday, the County indicates 13 homeless people countywide have tested positive for COVID-19, out of 2,000 cases in San Diego County. San Diego had the fourth highest homeless population in the  nation in 2018.  While the city of San Diego has recently taken emergency steps including opening up the convention center to house homeless people, the County thus far has no homeless shelters in the unincorporated areas, despite high homeless populations in unincorporated areas such as Spring Valley and Lakeside.

The city of El Cajon just approved $1 million to help residents including homeless people. For El Cajon’s homeless residents, the city’s “homeless response team” will be seeking to provide additional shelter space and motel vouchers and a safe parking program, transportation to regional homeless services, and provide rapid rehousing and rental assistance.  El Cajon is also providing rent relief and has asked landlords not to evict tenants during the COVID-19 crisis in order to prevent more people from becoming homeless. 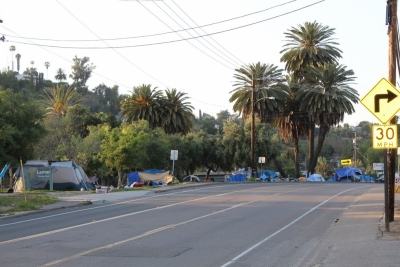 However, homeless communities still exist. Having driven by Lamar County Park earlier that day, where I saw over a dozen tents next to the street on sidewalks and grassy areas, I asked Mike if he had considered staying with other homeless individuals there or at other places in the county, but he shook his head .“I’ve been 30 days sober and I don’t want to get back into that stuff,” he stated. Mike’s main source of hesitation is dealing with disrespectful individuals. It may be an attitude of many, who are unwilling to give up their autonomy and place themselves in potentially harmful situations.

Mike also spoke about the difficulties attaining food during the COVID-19 shelter-in --place orders. He noted that some retailers and fast food restaurants were unwilling to serve him because he wasn’t wearing a mask, while other customers without masks were being served. He also related a story about a restaurant that wouldn’t serve him because he lacked a credit or debit card to complete his payment, since cash wasn’t acceptable.

Overall, Mike wasn’t too worried about the pandemic. He said he mainly keeps to himself and has been through a lot worse than the COVID-19 crisis. He also spoke about the positivity and support of many members in the community who had offered him food over the past few months. A local woman provided him a tent and a local construction worker brought tears to his eyes by giving Mike his full lunch. 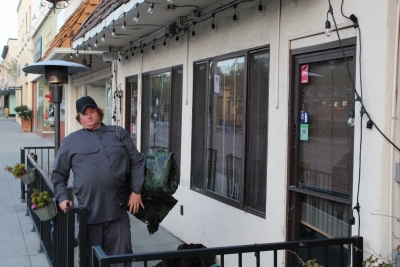 Photo, left:  Mike, homeless in La Mesa, says he is struggling to find food and no longer has a facility for showers.

With the recent strides being made by the City of El Cajon, ECM was informed by the city that federal guidelines must be met before the programs can begin, thus delaying the initiative until mid-May. While some individuals have been housed at the Convention Center and in hotel/motels, many congregate in local groups and some, like Mike, would rather make it on their own.