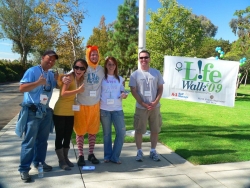 October 28, 2009 (La Mesa) -- Linda Noble believes strongly that abortion is wrong. But she has taken a different approach to the controversial issue from most pro-life organizations. On Saturday, 200-300 walkers turned out in La Mesa, with more in Escondido to raise funds for an education program authored by Noble.

“The political aspect has polarized people and prevented us from talking to people about the value of human life,” said Noble, who has written a whole-life curriculum for students. 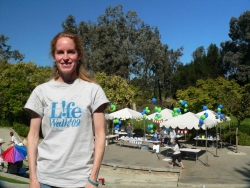 The program is primarily taught in private, faith-based schools. But she added, “We also do public school presentations.” The organization does not do anything political, Noble noted.

Michaelene Fredenburg is president of Life Perspectives(www.lifeperspectives.net) , the San Diego-based organization promoting Noble’s curriculum. “We do offer national programs,” she said.
In addition, the group provides “after-abortion outreach” for men, women and family members who have been impacted by abortion. The group has set up a website, www.abortionchangesyou.com and has also launched an “Abortion Changes You” ad campaign with signs on New York subways and other public places. 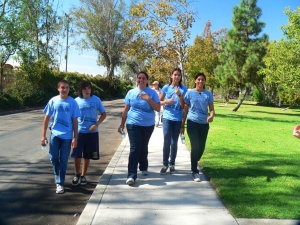 Participants believe education is key to reducing the number of abortions. Bethany Noble of Spring Valley concluded, “If we have these values, then things like stealing or abortion become unthinkable.”