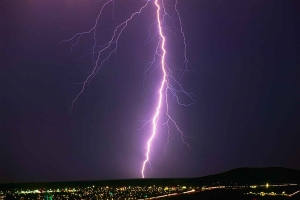 According to the National Weather Service, 15 lightning strikes were reported countywide, from coastal areas to the mountains.

The lightning caused some brief fire outages and minor fires in some urban San Diego neighborhoods.  Dry lightning was also reported, away from rainfall.

The storm brought just over a half inch of rain, offering little relief from drought.

Speaking of lightning, here are some enlightening trivia facts.

The dramatic bolt of lightning occurred over Oklahoma in 2007, traveling horizontally for 199.5 miles!  That’s roughly the distance from San Diego to Santa Barbara.

The World Meteorological Organization also announced another record—a lightning bolt in France in 2012 lasted 7.74 seconds—far longer than the fraction of a second duration for the average flash of lightning.