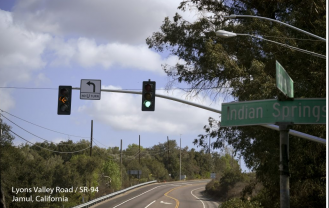 “The safety of our community has always been our top priority,” Chairwoman Erica M. Pinto says. “As everyone knows, this community has been calling for improvements to our local roads for a long time. We are proud to invest in projects like the Lyons Valley Road improvements, building a controlled intersection light which will make travel on the roads through our community much safer for everyone.”

Campo Road, also known as highway 94, has long had a high rate of serious accidents. Traffic issues were key concerns cited by opponents of the casino.

Among the sight distance improvements made are a new signal and safety enhancement measures for pedestrians, bicyclists, and all other road users.  Warranted traffic signals at intersections reduce the number and severity of collisions by controlling intersection access and properly posted all-way stop controls assure that reasonable drivers enter the intersection at a low speed and have more time to take heed of the traffic situation.

Jamul Indian Village of California (JIV) is one of 13 federally recognized tribes that are part of the Kumeyaay Nation, with roots in east San Diego County going back 12,000 years. JIV’s casino on its reservation in Jamul supports more than 1,000 permanent jobs in the region. The Tribe uses revenue and resources from the casino to fund educational opportunities, healthcare, and housing initiatives for its members, and projects that benefit the surrounding community, through a tribal-state gaming compact with the state of California signed in 2016. For more information about JIV, please visit jamulindianvillage.com.