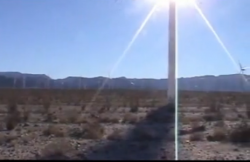 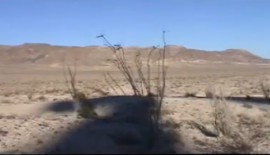 December 9, 2012 (Ocotillo) –Ocotillo Express Wind,  built on 12,500 acres of public, formerly protected federal Bureau of Land Management property, is now filled by dozens of towering wind turbines. Each massive turbine flashes red lights all night long. During the day, long blade shadows whirl across the desert sands, so there is no time when beleaguered Ocotillo residents or campers may escape the industrial impacts.

“Prior to this wind project going on line, I enjoyed sitting on my front porch and star gazing at the beautiful quiet, peaceful sky at night,” said Jim Pelley, Ocotillo resident and award-winning ECM photojournalist. “Now this is all a thing of the past, I now have bright red lights flashing in my face which I can also see inside my house which are very annoying and totally unacceptable.”

The shadow flicker has a disquieting impact as well, casting vast moving shadows as three blades on each turbine rotates slowly, hundreds of feet in the air.  Ultimately the project will include more than 100 turbines, most taller than the highest skyscraper in downtown San Diego.

Pelley says blades have been scarcely moving and that wind speed measurements atop a wind testing tower have shown minimal wind speeds thus far. He is skeptical that the project will product the wind power claimed by its developer, Pattern Energy.

“I can’t image anyone wanting to camp here anymore. This area was a breathtaking place to camp surrounded by beautiful mountains, peaceful desert and wildlife,” Pelley observed, adding darkly, “Thanks, Pattern Energy, for destroying our desert for this senseless project.”

Light pollution Is a sensitive topic for me as an amateur astronomer.

I live across the street from a school that used to have recessed lighting, They replaced that with surface mounted lights that illuminate my yard and living room 'till 10PM. I own a small Meade telescope and astronomical giant binoculars. I can rarely see the Orion Nebula or the Andromeda Galaxy or other deep sky objects and haven't seen the Milky Way from home in years.

The towers and lights in Ocotillo are a terrible thing but they will still have dark(er) skies than me, but the destruction of views and the residents lives is just tragic. It's a small community, without a voice, and Imperial County is very "Business Friendly".

The essence of what made Ocotillo attractive is GONE.   Next will be McCain Valley.   Who knows how many other areas in our backcountry will be invaded by these gigantic wind turbines in the future?   Why go out there anymore?   Meanwhile, back at home in our cities, we will be invaded by "peaker power plants" to support them.   It is all so very sad to witness.

How 'bout Ranchita, Hiker Gal? I've heard rumors it's neck is next on the chopping-block.

Better appreciate the views from Volcan now,...they may soon be gone.

It seems they can put them just about anywhere they want to now . . . what's to STOP them?

Nothing. (At least for the next four years.)

A once magnificently sublime, open expanse of desert destroyed for the sake of political vanity. What a waste. What a heartbreaking waste.  "Something positive for the community?" Right. How about a monument to the desperate, conscienceless ambition of man.

There is one positive I see in this.  Others around the world can learn from this and stop this industry from ruining their communities.  It is already happening in Vermont, New Hampshire, and Maine and other regions around the country where the blanket endorsements for these swindlers are over.

The public has been fleeced and duped by this industry for decades. In fact this industry is operating a lot like tobacco industry did in the 1960′s when they covered up their deadly impacts from smoking. But I consider the wind industry to be even worse because they sell themselves as saviors for a world they are quickly destroying.

Since there is little one could do at his point about this development the town could try and use this windfarm to their advantage like I have seen done elsewhere.  First every one should be made aware of the carbon dioxide that it is preventing from replacing coal or natural gas electricity.  I suggest then that you discuss with Pattern Energy how they can put up a senic viewing area that explains the wind farm energy production, operation, etc.  Then advertize that you have something special for the tourists to see.  Many wind farms will let in guided tours.  Lets turn this into something positive for the community..

the project is an option for the future.  Views could be restored by taking turbines down, though the desert floor is forever ruined since even with decommissioning they don't remove the foundations under the soil.

I would think some mitigation for flashing lights shining in people's windows could be done. Why can't they at least shield those lights to prevent them from shining in homes - direct them upwards so planes can see perhaps. The flashing is more annoying than a static light; is there a law that says they have to flash?

Yes I camped out there for 50 years but probably won't go again. Next off the list McCain Valley. Hope all you city living left wing tree huggers enjoy leaving your poach lights on all night and using up this environmentally friendly electricity that's not a mess in your back yard!?