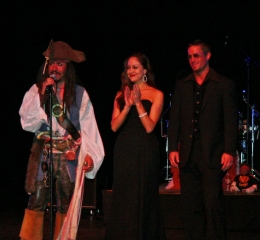 October 14, 2009 (El Cajon) – El Cajon City Council members voted unanimously yesterday to terminate its agreement effective January 1st with ArtBeat Management, a subsidiary of Christian Community Theater, which has managed the East County Performing Arts Center (ECPAC) for the past four years. The theater is slated to close for approximately two years for renovations including a new roof, improving access for the disabled, and moving the entrance to open onto Main Street, generating traffic toward local merchants and restaurants.

At yesterday’s Council hearing, Grossmont Community Concerts Association (GCCCA) president Ron Shelby pleaded with Council members to keep the theater open through the groups’ 2010 concert season, which is sold out. “We were in panic mode because we couldn’t find any place that can accommodate all of our performances,” said Shelby.  After the hearing, he expressed gratitude that Mayor Mark Lewis pledged to honor all contracts signed by CCT, assuring Shelby that the theater will remain open at least through the end of the GCCCA season in May

“This has been a long time dream of theater patrons, the City Council and downtown merchants,” a press release issued by the City stated. “In addition, the Public Safety Center is currently under construction and adjacent landscaping will be reconfigured to allow more extended use for theater events and fund raisers. It will also tie together pedestrian access from the Promenade to the theater and on through the Civic Center to both Magnolia and Park Avenues.”

"We want to work with the City and do all that we can to be cooperative and helpful," said Shelby, who offered to help book more concerts to raise reveneus if needed. The GCCCA regularly sells out its concert performances.

But others questioned the city’s motivations.

Eva Tanonis, a member of the Music Scholarship Council, shared her concerns in an e-mail with East County Magazine. “I am concerned about the future of the theatre,” she wrote. “I know Mayor Lewis has complained about the cost to El Cajon. He has hinted that he would prefer smaller theater, etc. I hope he keeps his original promise when first running for mayor to support the theater.”

Rumors have abounded that the City may consider razing or reducing the size of the theater in order to add a hotel and convention facilities. In an interview on October 1st following the hate crimes summit in El Cajon, East County Magazine asked Mayor Lewis about those rumors. 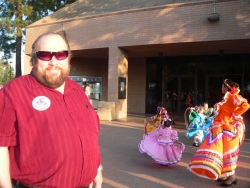 “We’ve heard those rumors before. They weren’t true then, and they aren’t true now,” he said, but added that it’s possible the theater could be reduced in size.

The theater has the reputation of having the finest acoustics of any concert hall in San Diego. Asked about the acoustics, the Mayor said preserving the acoustical quality would be a priority.

At yesterday’s Council hearing, Mayor Lewis reiterated that the theater will reopen following renovations. “I love the arts. I’ve been associated with the arts for many years,” he said, adding that the facility has not been renovated since 1976. “We don’t have paintings no more because the rain is coming down,” he said, emphasizing the need for a new roof. “We have to be ADA compliant.” Noting that parking will be in short supply while the new public safety facility (including a new police station) is being built, Lewis insisted that now is the ideal time to undertake the renovations.

The theater has long been viewed as a money-loser by the city, which has spent hundreds of thousands of dollars on repairs and subsidies for the city-owned facility. This year, ECPAC generated nearly $600,000 in revenue but over $741,000 in expenses, leaving a deficit of about $141,000. ArtBeat received no subsidy this year from the City.

But critics contend that El Cajon’s contributions to its performing arts center are far lower than Escondido and Poway contribute to their performing arts facilities. According to the San Diego Union-Tribune, Escondido contributes $1.3 million each year to support its California Center for the Performing Arts, in addition to hundreds of thousands of dollars on maintenance. That facility also ran at a deficit ($300,000) this year. Poway contributed $631,530 for its Poway Center for the Performing Arts.

“It is my observation that our neighboring East County cities could also contribute to these theater costs, since its early contributors [the Fletcher Foundation, and perhaps others…intended it to be for the community,” Jacqui Hanson, a member of the Music Scholarship Committee, observed, adding that founders originally hoped to locate the theater at Grossmont College.

When El Cajon turned over management to CYT’s ArtBeat, many criticized the move. A Blue Ribbon Commission appointed by Mayor Lewis failed to even interview one prominent applicant—the 20-year manager of the Civic Theater in downtown San Diego. Appointees included a Tupperware salesman, raising questions of cronyism.

Raymond Lutz from CitizensOversight.org, a government watchdog group, sharply criticized the Council for voting to let the Christian theater group manage the facility. “You are now seeing the bright light of sanity,” he said. Lutz also hinted that the project might reward developers who have given money to Council members. “You’ve all taken money from Hamann Construction,” he said, noting that the developer has since been implicated in a potential money-laundering scheme to funnel illegal contributions into Assemblyman Joel Anderson’s state Senate campaign fund. (Anderson’s finances are currently being investigatedby the Fair Political Practices Commission.)

Lutz expressed skepticism over the reasons for closing the theater and chided Council members. “Maybe the parking lot you gave away to Daryl Priest [of Priest Construction] could’ve been used.” He further questioned why the renovations would take two years, noting that a three-story building proposed for Maine Street would have taken only six months to build.

Hanson questioned the need for all renovations except replacing the leaking roof. “The theater has made every possible thing/change imaginable to be accessible to the disabled—part of the reason earlier deficits/costs have been so high,” she wrote in an e-mail to East County Magazine.

As for moving the theater’s entrance to front on Main Street, Hanson suggested, “Perhaps a grant could be found to cover this cost since it would be for the convenience of businesses who then would benefit…”

Bonnie Fredensborg, president, Friends of the East County Arts Association, expressed relief at yesterday’s meeting after hearing the Mayor’s assurances that the theater will ultimately reopen. But she urged that the public be included in plans for the remodel. “When plans come out, we will want to see them,” she said.

The City projects the facility will reopen in 2011, but has made no announcement yet about who will manage the theater at that time. “Once the changes are made to the theater, the surrounding plaza and the Public Safety Center is complete, except a grand opening celebration,” El Cajon’s press release concludes.

For supporters and patrons of the theater, that day cannot come soon enough. “The arts are as necessary as the air we breathe and assure a meaningful quality to our lives,” Tanonis concluded. “A hundred years from now, it will not be remembered whether the bills were paid, but what was offered and enjoyed in the theater and the effect of these events on the average citizen who patronizes the arts.”

Note: ECM previously reported that the theater would close after the December holiday performances, however the City has agreed to postpone closure until after all CCT contracts have been honored.