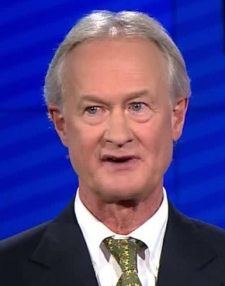 October 23, 2015 (Washington D.C.) – Former Rhode Island Governor Lincoln Chafee,  a Democratic candidate for the presidency, announced today that he is dropping out of the race.

Speaking at the Democratic National Committee Women’s Leadership Forum, Chafee stated, “A after much thought I have decided to end my campaign for president today. I would like to take this opportunity one last time to advocate for a chance be given to peace.”

Chafee was polling in low single digits.  His announcement follows withdrawal from the Democratic primary by former Virginia Senator Jim Webb and yesterday’s announcement by Vice President Joe Biden that he will not be entering the race.

On the Republican side, a dozen or so candidates remain in the race, though Texas Governor Rick Perry and Wisconsin Governor Scott Walker have both withdrawn their candidacies. Billionaire hotelier Donald Trump leads most national polls, though neurosurgeon Ben Carson is reportedly  polling  even or ahead in Iowa, the first caucus state. Carly Fiorina, after winning the second GOP debate, has seen her popularity slip in the polls since then.