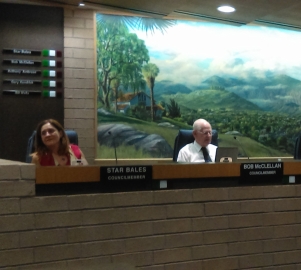 The Lincoln Club says, “These candidates have shown their dedication to responsible public policy, the expansion of economic opportunity, and an enhanced quality of life throughout San Diego County.”

Though popular in some business circles, Lincoln Club has attracted vocal critics.  CityBeat had this to say: “If money equals power, the Lincoln Club wields it like no other local political organization. Its 400 members, whose annual dues provide a guaranteed source of money for the group’s political action committee, are a who’s-who of lobbyists, developers, Republican-backed elected officials (and their staff members) and high-profile business owners…”

San Diego Free Press wrote, “Another key player in the effort to preserve the hegemony of San Diego’s shadow government that deserves attention is the Lincoln Club, a stealthy nexus of economic and political power. In essence, the Lincoln Club is a political entity bent on maintaining San Diego’s de facto private government led by the local power elite in perpetuity by any means necessary.”

Councilmember Star Bales says of her endorsement, “The Lincoln Club advocates for the pro-jobs, pro-business, pro-reform policies that have helped lure businesses and economic growth to El Cajon. As a candidate who believes in greater prosperity for our citizens and small businesses, I am proud to have this endorsement.”

Circo’s Lincoln Club endorsement follows his endorsement by Wells and the entire El Cajon City Council, as well as the early support of Senator Joel Anderson.

When asked his position on the budget by the East County Magazine, Circo replied “El Cajon is one of the few cities that runs in the black, and I would tend to follow conservative practices that would allow us to stay in this enviable position.”

Councilman McClellan did not respond to our request for comment.

In the 2014 Elections the Lincoln Club sent out hit pieces against Chaldean Chamber of Commerce President Ben Kalasho, who is running again in 2016.

All three Lincoln Club-backed candidates have declined to participate in Wednesday’s El Cajon candidates’ forum at Grossmont College co-hosted by four journalism organizations:  East County Magazine, the San Diego Union-Tribune, East County Californian and Mega News Network.  McClellan has said he will be out of town, Bales is representing the City of El Cajon in Long Beach, and Circo claimed a scheduling conflict.

All seven challengers seeking seats on the Council have confirmed that they will be participating in the candidates’ forum, which will be held at Griffin Gate in Griffin Center from 7 to 9 p.m. at Grossmont College on October 5th.