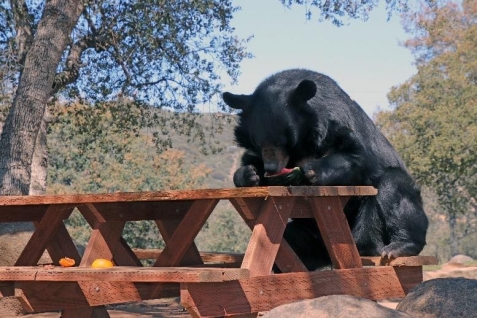 Grizzly, black and Himalayan bears at the sanctuary enjoyed PB&J sandwiches and other treats for the occasion. 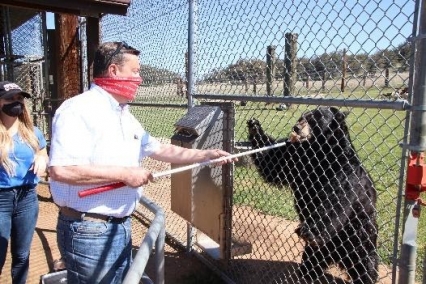 To help celebrate National Peanut Butter and Jelly Day, and to recognize the very special mission of Lions, Tigers & Bears, County Supervisor Joel Anderson and a couple of his staff also attended the event and enjoyed the beautiful day.

Anderson had the opportunity to feed a PB&J sandwich to Liberty, a rescued black bear.

He added, “I just want to thank you for all your hard work. Everything you see here today, 20 years ago, wasn’t here. It’s all Bobbi’s hard work and her team’s hard work.” 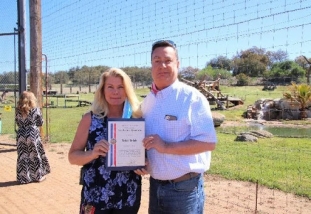 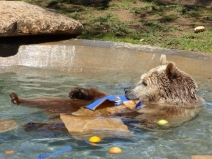 Visitors also had the opportunity to observe various species of bears opening boxes of hidden treats, savoring watermelon slices, lounging on picnic tables, and splashing in a pool to cool off on this warm Alpine afternoon.

Nestled on 93 acres outside of Alpine on the edge of the Cleveland National Forest, Lions, Tigers & Bears is a non-profit dedicated to providing a safe haven for over 60 rescued big cats, bears and other animals.

Their mission also includes providing education to the public to end the exotic animal trade. Lions, Tigers & Bears is a  no kill, no breed sanctuary that allows the animals to live out their lives with dignity in a caring and safe environment.

You can learn more, donate, or sign up for visits at Lions, Tigers and Bears. 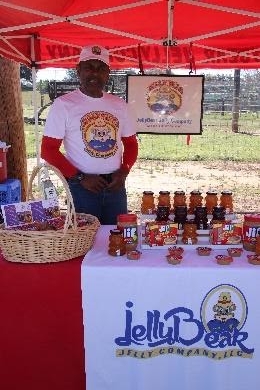 The Jelly Bear Jelly Company was founded by Mathew Weathersby eight year ago in Escondido.  Mr. Weathersby retired after 28 years as a San Diego police officer and is now happily making jams, jellies and marmalades.

“Each year, on National Peanut Butter and Jelly Day, which is celebrated on April 2, I try to come up with something different,” said Weathersby. “In 2015, we worked with Escondido Charter High School students to make a 51’ messy sandwich. We invited the Kinders and First Graders from the elementary schools,” Mr. Weatherby shared with great excitement.

Weathersby went on to recount that “a next later, on the flight deck of the USS Midway, I built the longest peanut butter and jelly sandwich ever made on a military vessel. Unofficially. Guiness doesn’t cover that kind of stuff,” joked Weathersby.

“It was a 301’10” long peanut butter and jelly sandwich,” boasted Weathersby. “We used 15 active duty sailors, 15 active duty marines, and they made the sandwich in under 4 minutes!”

“If you’re thinking of challenging my world record for the world’s longest peanut butter and jelly sandwich made on a military vessel, you can try. But in order to do it, you’re going to need 64 quarts of jelly, about 200 pounds of peanut butter, enough bread to cover the length of a football field, and one aircraft carrier,” shared Weathersby.

“We have some of the greatest jams and jellies you’ve ever tasted. A strawberry Margarita jam made with Jose Cuervo Gold tequila, Triple Sec and lime. And my banana nut raisin that uses Bacardi rum, peach cobbler, apple pie jam, a mandarin Orange Marmalade that’s to die for. So, some really good stuff!” 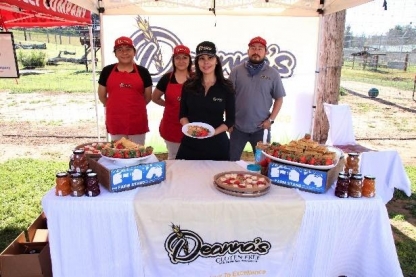 “We’ve been around for 14 years,” said Deanna Smith of Deanna’s Gluten Free Bakery. “I started the business for my family. I made a loaf of bread and it spread like wildfire. We are gluten free and allergy free.”

“Everything we do is gluten free, and we have an extended line that is allergy free,” shared Deanna. “We’re online and we also offer curb-side service and deliver in San Diego and Temecula. And we can put anything in the mail.”

History of Peanut Butter and Jelly

Contrary to popular belief, George Washington Carver did not invent peanut butter.  According to the National Peanut Board, “he was one of the greatest inventors in American history, discovering over 300 hundred uses for peanuts including chili sauce, shampoo, shaving cream and glue. He was a pioneer in the agricultural world and many refer to him as father of the peanut industry. His innovations also increased the legume’s popularity and made peanuts a staple in the American diet.”

The National Peanut Board’s website states that “the earliest reference to peanut butter can be traced back to the Ancient Incas and the Aztecs who ground roasted peanuts into a paste. However, modern peanut butter, its process of production and the equipment used to make it, can be credited to at least three inventors. 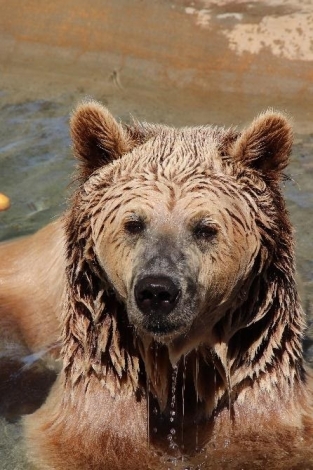 In 1884, Marcellus Gilmore Edson of Canada patented peanut paste, the finished product from milling roasted peanuts between two heated surfaces. In 1895, Dr. John Harvey Kellogg (the creator of Kellogg’s cereal) patented a process for creating peanut butter from raw peanuts. He marketed it as a nutritious protein substitute for people who could hardly chew on solid food. In 1903, Dr. Ambrose Straub of St. Louis, Missouri, patented a peanut-butter-making machine.

According to the websites Nationalcalendarday.com and Nationaltoday.com, the average American will have eaten over 2000 peanut butter and jelly sandwiches by the time they graduate from high school.

“Peanut butter was considered a delicacy in the early 1900s and was only served in New York City’s finest tea rooms. In a May 1896 article published in the Good Housekeeping magazine, a recipe “urged homemakers to use a meat grinder to make peanut butter and spread the result on bread.”  That same year, in June, the culinary magazine Table Talk, published a “peanut butter sandwich recipe.”

It is thought that Julia Davis Chandler issued the first reference to peanut butter (or paste) paired with jelly on bread in the United States in 1901. Her article is found in the Boston Cooking School Magazine of Culinary Science and Domestic Economics. In the late 1920s, the price of peanut butter declined, and the sandwich became very popular with children.”

According to the Peanut Board, “during World War II, both peanut butter and jelly were part of the United States soldiers’ military ration list. The U.S. Army’s food ration list included peanut butter, jelly, and bread — so give soldiers the credit for combining these tasty ingredients into the classic combination we know and love today.”