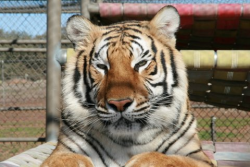 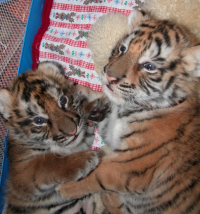 She added, “ Everything that could possibly be done was undertaken. This was a freak occurrence - very rare - and instantly paralyzed her. She would have felt no pain; just confusion because her legs didn't work.  After consulting with the vets and surgeons, it would have been inhumane to leave her in this condition.”

Brink rescued Natasha and a male tiger, Raja, later discovering that Natasha was pregnant.  They were the first tigers recued by the facility. Sitarra and her sister, Tabu, were born at LTB on November 8, 2002. Sitarra, which means “Star of India,” weigh just two pounds, 12 ounces at birth.

“She was incredibly intelligent and independent. Sitarra was fascinated by people. She was usually the first to greet anyone who approached their enclosure,” Brink recalled. “As cubs, Sitarra and Tabu slept together and spent hours watching the farm animals and resident dog Hobie at LTB.

A fund to cover Sitarra’s emergency medical expenses has been established.  Call  (619) 659-8078 or click here if you wish to contribute.