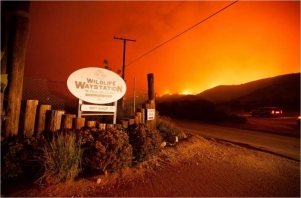 Emergency evacuation efforts at Wildlife Waystation started yesterday as the Santa Clarita fire AKA the Sand Fire whipped through the area at an alarming rate.  The fire has now charred over 3,000 acres.

The Sand Fire broke out on Friday afternoon, and spread to over 3,000 acres by the evening hours. The Sand Fire was 1/2 a mile away from Wildlife Way Station and officials reported it was 0% contained when Lions, Tigers & Bears left San Diego.  As of Sunday, Wildlife Waystation posted on its Facebook page that the facility now appears safe—after many animals were evacuated.

You can help by making an emergency donation to replenish and purchase additional supplies for this massive evacuation effort  by clicking here. Please include "fire" in the donation note field.

What Does it Take to Evacuate Big Cats & Bears During a Fire Emergency?

Being prepared is the first step in a smooth and safe evacuation. Transport cages are the "working horse" and lifeline at LTB’s sanctuary if an emergency disaster like a fire strikes. 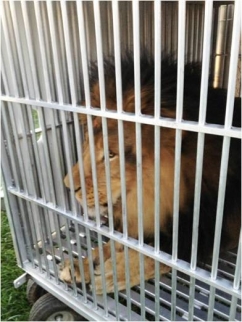 Because a lion is NOT your typical house cat, you can't just load them up in a carrier crate and be on your way. Instead, LTB uses transport cages to safely contain our big cats and bears.

Transport cages are integral to the day to day care of our animals as well as when an emergency strikes. They cost around $6,000 apiece to build.