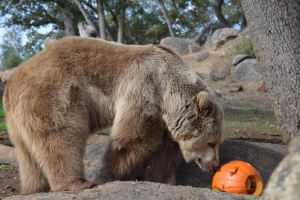 October 29, 2016 (Alpine) - Lions Tigers & Bears (LTB) - an accredited big cat, bear and exotic animal rescue sanctuary, in San Diego County, Calif., held it's 6th annual Halloween Spooky Campover from Friday, October 28 to Saturday, October 29, for guests of all ages to come and spend a wild and goulish night under the stars with the 60+ rescued animals that call the sanctuary home.

The campover began at 3pm on Friday, when roughly 150 guests showed up with their tents and camping equipment in tow.  Events on the first night included face painting, pumpkin carving, campfire songs - and of course, s'mores, hot cocoa and apple cider.  Barbecues were also provided for campers that wanted to cook their own dinner.

The following morning campers awoke to the sounds of lions roaring and tigers chuffing.  Coffee and hot cocoa were provided while guests ate their breakfast.

At 9am campers put on their Halloween costumes and were judged by the sanctuary's volunteers.  Because all of the costumes were so good this year, three winners were picked.  In total, 20 frightening contestants were in participation and fun was had by all!

The Pumpkin Bash was next at 10:30am.  All of the pumpkins carved the night before were loaded up with goodies for the animals and placed in their habitats by the keepers.  Campers enjoyed watching the animals eat their pumpkin treats during a guided visit of the sanctuary, before packing up and heading out.

While LTB hosts the campover, the volunteers run the events.  This will be the 6th year that volunteer husband and wife team, Brian and Jill Gamache, have been in charge of the event.  For information on becoming a volunteer at Lions Tigers & Bears, please call (619) 659-8078 and select option 4.

All of the proceeds raised by the Spooky Campover benefit the animals at LTB.  The general public can donate to the sanctuary by visiting them online at lionstigersandbears.org.

CLICK HERE FOR VIDEOS & PHOTOS OF THE SPOOKY CAMPOVER!