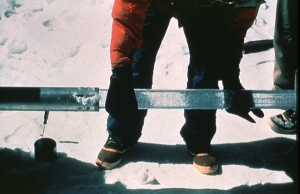 February 27, 2016 (San Diego’s East County) – Jeffrey Severinghaus, PhD, is one of the world’s top climate scientists.   A professor of geosciences at Scripps Institute of Oceanography at the University of California, San Diego, he was recently appointed to the prestigious National Academy of Sciences.   Dr. Severinghaus has pioneered research efforts measuring trapped gas bubbles in ice cores in Antarctica and Greenland to detect past ocean temperature changes – with astonishing results.

Asked about climate skeptics who claim climate change is merely cyclical, he quickly dispels the theory that recent warming is part of an age-old trend.  That’s because molecules from burning fossil fuels are chemically different from carbon naturally seeping from the ocean floor.  The differences are obvious, measurable, and provide clear evidence that man’s actions are rapidly accelerating climate change.

Moreover, his research suggests that warming could occur much more rapidly than most other studies have predicted.

"[ . . . ] molecules from burning fossil fuels are chemically different from carbon naturally seeping from the ocean floor. The differences are obvious, measurable, [ . . . ]" The molecules are the same chemically however, the atoms making up those molecules have different numbers of neutrons in their atoms. This is known as the "Suess Effect," after Dr. Hans Suess, another Scripps scientist. Please see: https://en.wikipedia.org/wiki/Suess_effect

It makes tracing the source of CO2 in our planet's atmosphere back to fossil fuel burning very easy. It is almost as if the CO2 molecules carried birth certificates.

I can't get the audio to work.

our site was down briefly last night, depending when you tried.