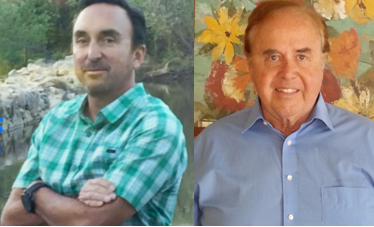 Mark your calendars for our candidate forum with Helix Water Board candidates and Lemon Grove Mayoral candidates September 21 from 5:30 to 8 p.m. at the Lemon Grove Library.

September 6,2016 (San Diego’s East County) – Mark Gracyk and  Dan McMillan both say they’re running for the Helix Water District Board to stop rate hikes –and roll them back if possible.  Both are running against incumbents (Chuck  Muse and John Linden) who have repeatedly voted for rate hikes. Hear our full interview, aired on KNSJ radio,  by clicking the audio link;  click "read more" and scroll down to read highlights.

Gracyk,  MicMillan, Director Linden and challenger Aaron Zajak have all agreed to participate in our candidate forum on Sept.21. Director Muse sent regrets as he is out of the country.  Erik Collins, another challenger, has not responded.

Both Gracyk and McMillan have extensive experience in the water management business and other public service. Both have also been endorsed by the Grossmont-Mount Helix Improvement Association, which has been outspoken in opposing the water rate hikes.

Gracyk has 20 years of professional water management experience, currently serving as Reclaimed Water Manager at the Marine Corps Air Station at Miramar.  He formerly served  as chair of the Proposition W Bond Oversight Committee for the Lemon Grove School District  to oversee use of public funds used to construct the library in Lemon Grove.  An Army veteran and San Diego State University graduate, he holds two relevant degrees and has lived in the district for 20 years. He is running in District 3.

McMillan is a former director of Padre Dam Municipal Water District and has also served on the San Diego County Water Authority and San Diego County Waste Water Management District. He also served on the San Miguel Consolidated Fire Board, where he supported turning over firefighting to Cal Fire, but resigned after moving out of the district.  He has served in the Marine Corps, has an MBA in finance and has worked in commercial real estate and finance. He is running in District 1.

Gracyk says he decided to run for the board after attending a meeting where hundreds of angry ratepayers came to oppose a rate hike; the board called police and approved a 5-year rate hike of 70% despite public objections. Then this year, the board voted for a 10.3% increase.

McMillan also spoke at that meeting against the 5-year rate hike, which he calls unfair.

Gracyk  notes that when the Governor asked people to conserve, Helix ratepayers cut back20%. He says people have a “tough time understanding”  why their rates are going up when they conserved water as asked.

McMillian agrees that “people  are irritated that their bills are going up when they’re saving money.”

Gracyk says the operating portion of the budget should be pared back, such as delaying purchase of new vehicles with 80,000 miles. “We just can’t say that one part of the budget is off limits.”

Asked if he would commit to roll back rate hikes,  McMillan replied, “I would certainly want to look at it and I do pledge that I would look at and push for a citizens committee also to look at cost cutting means.  I would like to be able to cut back or roll back some of this raise.” He hopes to push it back to 3 or 4% “or maybe even zero.”

Gracyk says he’s been listening to people across the community. If it is possible to either freeze it or roll it back, I’d certainly look into that. …There’s no more rubber stamp. There’sno more carte blanche to future rate hikes once I’m on the board,” he pledged.

He voiced concern that people may stop conserving if rates continue to go up due to successful conservation efforts.

McMillan says those who can’t afford rates may resort to brown lawns and pulling out trees.  “We need to end this death spiral. We need to stabilize rates,” he said.

McMillan agreed,”The fire danger is real…you drive around and see a lot of brown lawns.What didn’t burn before could burn in the next fire.”

Helix only has three rate tiers and ratepayers have long complained the system is not fair,failing to take into account family size, income or lot size.

McMillan says when he was at Padre Dam they did” water budgeting.” Tiers are based on lot size, family size and the number of animals.  Ratepayers have time to appeal.”The model is out there and it can be adopted by any water district.”

Gracyk said he like the idea and would likely support water budgeting.

Both candidates also voiced support for keeping Lake Jennings open.  Their opponents initially supported closing the lake until a committee headed by director Joel Scalzitti found ways to make the lake pay for itself through upgrades such as adding kayaks and tipis.

McMillan sat on a Santee Lakes committee and recalls similar issues there. He says he voted to build cabins, add solar and find other ways to make those lakes possible.

Scalzitti is also running for reelection to the Helix Water District Board in District 5, with no opposition.

The other candidate in District 1, running against Muse and Gracyk, is Erik  Collins, listed as a finance manager on his ballot statement.

District 3 has two additional candidates besides Linden and McMillan.

Aaron  Zajac is listed as a calibrator with the Registrar’s office.

Lou Tejeda is a retired Helix Water District employee who spoke in a  Helix board meeting against a legal settlement that turned over land in Lakeside’s El Monte Valley to a sand mining company. He accused the board of undervaluing the land by omitting value of the sand and suggested impropriety in gifting public land to a private entity.

Interview with Mark Gracyk and Dan McmMillan,Helix Water Board candidates