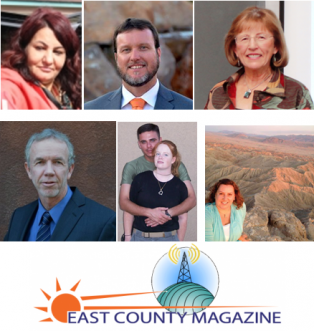 February 7, 2017 (San Diego's East County)-- Our December 2016 radio shows are now online. For links to listen to the shows plus a full list of topics an interviews, click here (Sound files may take a few moments to load).

The East County Magazine Show airs Mondays and Fridays from 5 to 6 p.m. on KNSJ, 89.1 FM.  The shows rerun on Tuesdays at 9 a.m. and Saturdays at 8 a.m. Pacific Standard Time.  Read more and listen to our December shows:

Audio files to listen to shows are  at the bottom of this page, below the index of shows.

Upset in the GCCCD:  Adams over Caruthers

David Dickens shares insights on A Christmas Carol, by his ancestor Charles Dickens

Helix Water has new board majority

Bookshelf: Amanda Matti, author of A Foreign Affair, about her true-life romance as a U.S. soldier with an Iraqi man

Rerun of 12/19 show due to holiday schedule.

Hendrix lives on in plant found by SDSU researcher