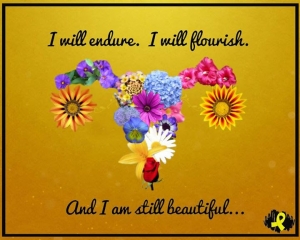 A community coming together to fight an invisible disease

February 18, 2016 (San Diego) - On March 26, 2016, join the Bloomin’ Uterus™ Endometriosis Awareness and Support Walk beginning at 9:00 a.m. at Lake Miramar.  Registration is free, but donations are appreciated. All of the funds are donated to the Endometriosis Foundation of America.

Endometriosis is an incurable disease that affects 1 in 10 women, and it is estimated 176 million women worldwide suffer from it.  Many women do not know they have it; others suffer in silence.  Is endometriosis fatal?  No.  That's probably why it's not so well known as breast cancer or AIDS.  But it is severely debilitating and life-altering.  Due to misdiagnoses and a lack of education in the medical and laymen community, it takes some women over 8-10+ years to be diagnosed.  During that time, women may think they're alone or weak, many lose their jobs due to missed days, or relationships and friendships may be destroyed.

Symptoms usually consist of chronic pain, inflammation, swelling, internal bleeding, infertility, or adhesions (scar tissue) can adhere organs together.  The only way to diagnose this disease is with invasive surgery (there are no tests or scans that can confirm its presence).  The cause of Endometriosis is not known.  And, again, there is no cure.  It is generally found within the pelvic cavity, grafted onto the uterus or ovaries; however, it can even form on other organs, including the brain, lungs, heart, eyes, and skin, causing severe and possibly life-threatening symptoms.  The treatment?  Multiple surgeries to remove the invasive growths inside the body (many women have dozens of these surgeries in their lifetime), medications to try to suppress the symptoms, pain medications, and pelvic floor therapy.  Many women seek relief homeopathically or through Eastern Medicine as well.  These treatments only suppress the symptoms; they are not a cure.

The Bloomin’ Uterus™ Endometriosis Awareness and Support Walk is about the community coming together: strangers becoming friends, women who thought they were alone and suffering in silence finding their voice, raising money to help fund research to find a cure.  You, your mother, sister, aunt, significant other, neighbor, friend - any of these women may have this disease.  Some may not even know it.

If you would like to register for the walk, donate to the fundraising efforts, would like more information regarding the monthly support groups, or would like to learn more about Endometriosis, please visit www.bloominuterus.com or email Lisa Drayton at ladrayton@gmail.com.

About Bloomin’ Uterus™: Bloomin’ Uterus™ runs an online blog, hosts monthly support groups, and annual awareness events in San Diego regarding Endometriosis.  It has brought women with Endometriosis and the families of this community together in a show of support, strength, and solidarity.  What began as a small blog in late 2014, has developed into a family which has raised and donated over $2,200 for the Endometriosis Foundation of America to help educational awareness and research campaigns for a cure.  Together we can do great things.