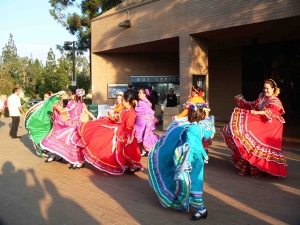 Photo: Dancers performed in front of ECPAC in its heydey.

February 9, 2017 (El Cajon) – The long-shuttered East County Performing Arts Center (ECPAC) may finally be reopened under management of Live Nation, which claims to be the global leader in live entertainment. According to the company’s website,  Live Nation operates in 7 nations, has produce shows in nearly 40 countries, and has a concert somewhere in the world every 20 minutes.

The El Cajon City Council will vote Tuesday, February 14th at its 3 p.m. meeting on authorizing the City manager to negotiate a draft management agreement with Live Nation .  View agenda and attachments.

The theatre, which seats 1,100 people and has among the finest acoustics of any local theatre, has been closed since December 2009 and will require extensive repairs including a new roof and  access for the disabled.

“This has been worth the wait,” says Councilman Gary Kendrick.  “They’re a big outfit and everything they touch turns to gold.  We know we’re going to have to subsidize them and put $2 to 4 million into fixing up the theatre, but this will be huge for downtown.”  But he adds, “We’ve got to get this right this time.”

Ray Lutz, founder of Citizens Oversight and Save ECPAC, a group that helped save the theatre from being torn down and replaced by a hotel several years ago, voiced enthusiasm when told that Live Nation is interested in managing and reopening the theatre.

“That’s great!” he told East County Magazine. “This is a world class theatre management company and this is going to be the best thing that ever happened to El Cajon.” 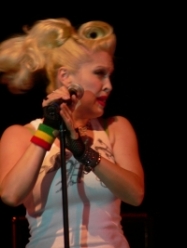 Lutz anticipates Live Nation will bring in “really good acts” that will draw audiences from across the county,  as it does for other local venues that it manages.  “They also have the muscle and the know-how to manage it.  It will put El Cajon on the map.”

The theatre was built in partnership with Grossmont College but later, the city took over ownership. In its heydey, the theatre showcased up and coming talent, including some performers who went on to become major celebrities. It also provided a stage for community events, from holiday shows to a fundraiser for the Mother Goose Parade featuring celebrity impersonators (photo, right).

The theater went through troubled times before it was shut down in 2010 for what was initially planned as a temporary closure, but became long-term due to the high cost of repairs.

Prior to that time,  the theater had been losing money for the city despite various managements including Christian Youth Theatre, Arts Center Foundation, and more.

The city considered a proposal to  partner with Rock Church, but that fell by the wayside.

Lutz’ group had also submitted a proposal  with ideas to upgrade the theatre including adding a dance floor/mosh pit to attract younger theater goers for rock concerts and more.

“This is the kind of thing we were trying to get the Council to do,”  says Lutz, who  has also proposed allowing alcohol sales and adding cupholders to theater seats to boost revenues.

One casualty of the seven-year closure was the Grossmont Community Concert Association founded by Lutz’s father.  The musical group regularly sold out its concerts at ECPAC, but dissolved its operations last year after being unable to recoup costs at a smaller venue.

Asked the GCCA might be resurrected if ECPAC reopens, Lutz said it would be difficult, but that he would be open to considering that if a major donor came forward to make it possible.

He voiced just one regret upon hearing that the theatre may finally soon reopen, musing,  “It’s a shame that this took so long.”

City Manager Doug Williford told ECM he does not yet know whether any contract with Live Nation would include options for community groups to use the theatre for performances on dates when Live Nation doesn't have shows booked.

The Council will also vote on a consent calendar item to reject other bids for the theatre renovations in order to enter into the negotiations with Live Nation which is expected to assist with the renovations. Two bids were deemed unresponsive to the bid requirements and a third was over budget by approximately a half million dollars.

If the Council votes on February 14th to pursue negotiations with Live Nation for management that could reopen the theatere and bring back headliner acts that the public and downtown business owners have long clamored for,  members could provide a heartfelt Valentine's Day gift to the community.