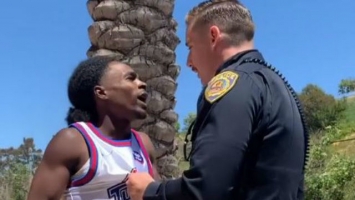 August 8, 2020 (La Mesa) – The La Mesa Police officer involved in the controversial stop of a  young Black man near the Grossmont trolley stop on May 28 is “not employed by the City of La Mesa in any capacity,” the city announced yesterday. The incident, widely viewed as racial profiling, ignited rage that exploded in a devastating riot two nights later.

The city's terse statement provided no details on whether Officer Matt Dages resigned or was terminated, nor whether any wrongdoing was found in an investigation. He was placed on administrative leave pending an external investigation, the results of which have not been made public.

An assault charge against Amaurie Johnson, 23, was dropped after body camera footage failed to substantiate Officer  Dages' version of the incident.

The announcement of Dages' departure has drawn reactions ranging from relief to calls for greater accountability and transparency.

A video that went viral on social media prompted accusations of racial profiling by Dages, who is White. Dages claimed to have stopped Johnson for smoking in a prohibited area. Body camera footage shows Dages pushing Johnson into a seated position and grabbing Johnson's shirt; Johnson's fingertips touched the officer for a brief moment. No smoking materials were found in a search of Johnson, who said he was waiting on a ride that arrived during the altercation.

Johnson has since filed a lawsuit against the city of La Mesa and Dages seeking damages.

The incident occurred just days after the killing of George Floyd, a Black man, by a White police officer in Minneapolis prompted national protests and civil unrest. As a result of Dages’ actions, protesters targeted  La Mesa on May 30.

After a peaceful afternoon march, a tense standoff  at the LMPD station dissolved into violence Police were pelted with rocks, bottles and a Molotov cocktail (bottle bomb) hurled at the building; officers responded by firing tear gas, pepper spray and bean bag rounds at protesters, resulting in injuries to some. A riot ensued, resulting in the burning down of two banks and a historic building, as well as looting and vandalism of dozens of buildings.

Certain due process protections for officers are provided in the Peace Officers Bill of Rights, including the right to an investigation and an appeals process, it does not overtly prohibit a city from revealing if an officer is terminated. It is unclear whether La Mesa may have a personnel policy of its own that prohibits disclosure of the reason when an employee’s employment ends.

Some California police departments have publicly announced firing of officers within the past couple of months.  The Long Beach Police Department disclosed in June that it had fired a police office for posting a photo of himself holding a baton over a blood-spattered sidewalk, the Sacramento Bee reported. In March, the Elk Grove police department fired an office who allegedly kicked a burglary suspect in the head and failed to report excessive force used, according to ABC news.

California is one of only five states that does not have any law to track, monitor, or prohibit police departments from hiring officers dismissed for misconduct in other law enforcement jurisdictions, according to a report published by Newsmakers.

That report is titled, “45 states keep bad cops who get fired from getting rehired. Why isn’t California one of them?” The article, published July 2, reveals that a bill to establish such a system was introduced in late June in Sacramento. Such measures have long been opposed by police unions, but that opposition may be waning in the wake of nationwide racial justice protests over police brutality.

Roger Goldman, a St Louis attorney and law professor, has been working for decades to help create a national database of decertified police officers that would prevent police officers who commit serious offenses from being rehired elsewhere  “We would do this for any other profession,” he has stated. “If we do it for cosmetologists, we should do it for police officers.”

Councilman Bill Baber reacted to news of Dages’ departure. “I hope this allows us to start the healing in La Mesa,” he said, adding that the city does not disclose details on personnel matters. “We have great La Mesa police officers who put their lives on the line for us. Let’s be thankful for their service.”

But Tasha Williamson, an organizer of racial justice protests in La Mesa and elsewhere, pledged in a Facebook post to continue protests until “a complete law enforcement change happens.” She noted other “demands” not met.  Williamson wants to see Dages criminally charged and the city “make right the wrong and damage this ex-officer did to Mr. Johnson.” She has also called for charges against Detective Eric Knudson, who fired a beanbag round that struck a protester, Leslie Furcron, in the head after she threw a beverage container toward the police station.

She and others also voiced anger over the prospect  that Dages could be employed by another law enforcement agency.  Demetrius Antuña expressed frustration over not knowing whether Dages retired, was fired, or may be with a different department. “Are citizens in a different city unsafe with him on the beat?” he asked. “This lack of transparency is unacceptable!”

The city is planning a virtual town hall August 13 from 6 to 8 p.m. for residents to discuss the May 30 protest that turned violent and get answers to their concerns. Questions or comments may be emailed prior to the meeting and in-person comments will also be accepted at the Adult Enrichment Center on La Mesa Blvd. Full details on the meeting will be published on the city’s website at https://www.cityoflamesa.us/.

Police issues, public safety and racial justice concerns are likely to among the key issues in the November election, when two city council seats are on the ballot.  The deadline to file to run was Friday, August 7. As of today, only two candidates are listed as qualifying for the ballot: incumbent Kristine Alessio and Jack Shu, who has long advocated for a strong citizens police oversight commission.

Several other potential candidates pulled  papers to run, including Councilman Colin Parent, but as of today are not listed as qualifying, though there may be a delay in reporting any last-minute paperwork turned in on Friday.