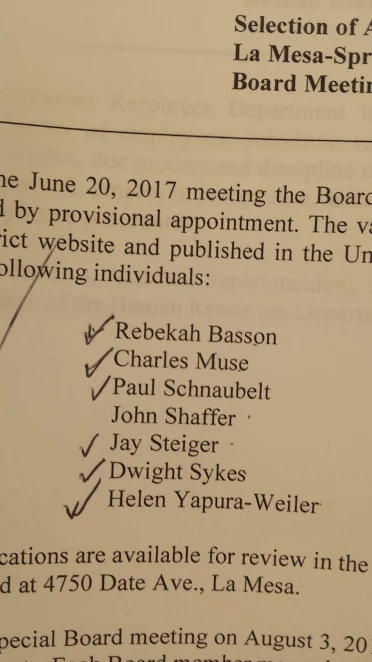 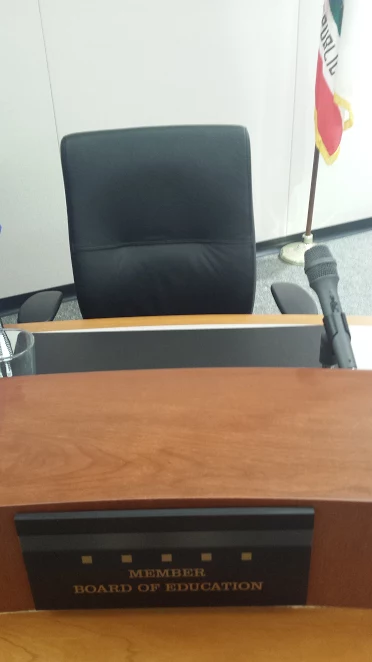 August 3, 2017 (La Mesa)-- In the La Mesa-Spring Valley (LMSV) Board of Education’s last meeting before the school year began, six candidates for the open seat moved forward to the public interview this Thursday, Aug. 3. Rebekah Basson, Charles Muse, Paul Schnaubelt, Jay Steiger, Dwight Sykes and Helen Yapura-Weiler were each nominated by current members for the appointment. The only eligible applicant who did not receive a nomination was John Shaffer.

Muse, who was formerly a member of the Helix Water Board, will not be able to attend the Thursday interview due to a trip to Seattle. According to Superintendent Brian Marshall, Thursday is day 58 during the 60-day period in which the board must appoint a new member before a special election, that would cost the district half a million dollars,  is ordered. Due to the tight deadline, the interviews, selection, and swearing in will all occur on Thursday during the special meeting. The deadline meant that no special accommodations for Muse could be made and he will most likely not be selected.

The other five candidates have a variety of experience.

Basson graduated from the 2016-2017 East County Chamber of Commerce Leadership Program and received the Senate, Congressional, County & State Assembly Recognition of Leadership in 2017. She is an administration assistant at Foothills Christian Church.

Schnaubelt recently retired after spending 30 years serving the LMSV school district. Although no longer a teacher in the district, Schnaubelt, who identifies as a fiscal conservative, wants to continue his work in ensuring the success of the district. He has previously headed up the LMVA Teachers Association.

Steiger was once a student in the LMSV District and now his children attend schools in the district, where he has been active in Parent Teacher Associations (PTA). He cites his volunteer experience as giving him a deep understanding of issues the Board must solve. He has served as chair of the LMSV District Advisory Council and member of the School Site Council, the Prop M and Prop U Citizens Bond Oversight Committees, and LMSV Budget Study. Steiger received endorsements from Board of Supervisors Chair Dianne Jacob who described him as an exemplary leader in the district. La Mesa Councilmember Kristine Allessio said in an endorsement letter, “Steiger is an independent decision maker who is well respected… He has demonstrated that he has a head for policy knowledge and a heart for the interests of our children.”

Sykes has worked in many educational positions, including as a custodian and a principal. He also holds a Master’s Degree in Educational Leadership from San Diego State University.

The final candidate, Yapura-Weiler, is a lawyer who has spent the last three years serving as a student advocate for special needs students through the San Diego Unified School District. She is also on the PTA for Gage Elementary where her daughter begins kindergarten this fall.

The majority of the meeting was spent on a Human Resources report given by Assistant Superintendent of Personnel Tina Sardina. The LMSV district has 1,266 employees, making HR’s job of huge import. For 12 certified positions offered last year, the district received 872 applicants, which guaranteed only the applicants filled those positions through the competitive process. The Board approved an action item to renew partnerships with local universities for recruitment.

All of the action items on the agenda were approved without any dissent or abstention. The Board adopted Board Policy Updates, including a clarification that California’s non-discrimination policies supercede relaxed federal policies under the new administration. This particularly pertains to California’s stance against discriminating based on gender for bathroom use.

The LMSV Board meets this Thursday for the appointment of the new member and will have its regular meeting on Aug. 15, five days after school begins in the district.