Updated with reactions from the President and Vice President

Photo, left: Screenshot via CNN, Derek Chauvin is remanded into custody after verdict
April 20, 2021 (San Diego’s East County) – Local social justice advocates voiced gratitude for today’s jury verdict in Minneapolis, where a jury found former police officer Derek Chauvin guilty on all three counts (second degree murder, third degree murder, and manslaughter) in the death of George Floyd. But activists also cautioned that more action is needed to bring about reforms in policing to prevent future injustices.
After video of Floyd’s death under the knee of officer Chauvin on May 25, 2020 went viral on social media, protests erupted nationwide including La Mesa, Santee and El Cajon in San Diego’s East County.
Francine Maxwell, President of the NAACP San Diego branch, called the verdict “a step in the right direction.” In her statement, she adds, “This has taught my son today what hope looks like, that when police don’t obey the law, this is what justice looks like. This police officer, who joined a noble profession, he was not noble. He operated under the color of the law.” 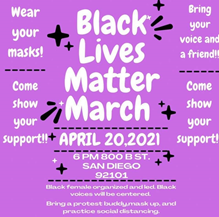 Racial justice activist Tasha Williamson, who organized protests over Floyd’s killing last year including the May 30 protest in La  Mesa, urged racial justice supporters to “come out of your home and into the streets! This is not a celebration, racism did not die with this verdict,” she posted on Facebook, adding that Chauvin still faces sentencing and three other officers have trials coming up.
“They are still killing us, they are still brutalizing us,” Williamson noted, posting an announcement of a Black Lives Matter march tonight at 6 pm. starting at 800 B Street in San Diego.
Shane Harris, President and Founder of the People’s Association of Justice Advocates, posted a photo of himself (below, left) watching the verdict in the Chauvin trial.  Harris, who traveled to Minneapolis last year, met with Floyd’s family and participated in a march there after Floyd’s killing. On Facebook, he announced that his organization joined with others to send a letter to San Diego County Sheriff William Gore, San Diego County Chairman Nathan Fletcher and the San Diego County Law Enforcement Review Board calling for a “Reimagining Policing” data request. 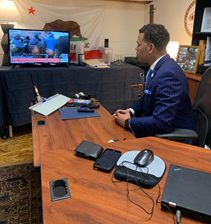 The data request seeks a breakdown on how many officers within the San Diego County Sheriffs Department have two or more sustained use of force incidents on their record, how many of those officers have been involved in shootings, and more.
“Reimagining policing is also about protecting the taxpayer as well as families who lose their loved ones to police violence,” Harris concludes. “The reality is that any city can have a Derek Chauvin so we need to be more proactive in weeding out those cops ahead of the next black man who is killed by a police officer. Who is the Derek Chauvin in your town? Request the data, do the analysis, bring forth actionable policy and then end the problem. This epidemic has to end.”
Congresswoman Sara Jacobs (D-San Diego), stated, "I am grateful for the jury’s guilty verdict today, but true justice would be having George Floyd at home with his family. One guilty verdict doesn’t change the reality of being Black in America.” 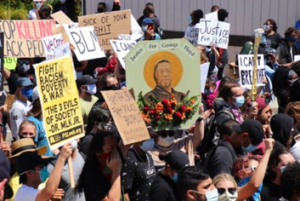 Photo, right: George Floyd protest in La Mesa May 30, 2020
She continued, “For decades, Black Americans have had difficult conversations with their children about the dangers of police interactions gone wrong. And for decades, they’ve been subjected to video footage of their loved ones beaten and brutalized when the worst happens. We have to do better, and we will do better.”
While she praised the verdict as sending an “important message of accountability,” Jacobs wants to see federal legislation passed to implement changes nationally  “Last month, the House passed the George Floyd Justice in Policing Act, a bill to reform a broken system. It’s time for the Senate to pass the bill and for all of us to start the hard work of doing right by Black Americans,” Jacobs said. “Black lives matter, and George Floyd should still be here.”
Republican Congressman Darrell Issa, whose district also includes much of East County, has thus far not issued a statement on the verdict.
Ammar Campa-Najjar, who ran unsuccessfully against Issa in the 2020 election, posted on Facebook, “There’s something broken about justice when it means a black man is killed and his murderer lives on in prison. That’s not equity or full justice, but at least it’s accountability and closure for the Floyd family.  Now Congress must act to fix this broken system.”
Genevieve Jones-Wright, former candidate for District Attorney, posted on Facebook that though today’s verdict is important, “Our work is not done. There are countless civilian deaths at the hands of law enforcement every year in this country, many of which never make national news or become a trending hashtag. Justice has been denied for far too many families and communities.”
She added, “We must continue to push — as we did in unprecedented numbers all across the globe this past summer — and demand transformative and substantive changes to our policing systems. We must have real accountability, robust oversight, and authentic transparency. We must put up a wall between District Attorney's offices and law enforcement so that they actually prosecute these murders with vigor and skill and to the fullest extent of the law.”
The verdict drew praise even from some working in the justice system.
San Diego paralegal Brian Lafferty, who has family working in law enforcement, wrote, “Every time I saw that awful video I saw a cop who thought he was invincible, that he could kill this man with impunity believing that he couldn’t possibly go to jail. I saw a bully who felt he could get away with killing a man because of a recent history of many bad cops getting away with killing black unarmed citizens. It is tragic that George Floyd paid with his life for this man’s arrogance. But today, 12 people chose to hold Chauvin accountable. As someone who has family who works or has worked in law enforcement and as a person who has had experience working in law enforcement, this verdict is as just as it is a relief.”
Sheriff Bill Gore noted that Floyd’s death sparked widespread anger around the world.
In a statement, Gore says, “Today's verdict may bring a number of emotions and responses from our community. The San Diego County Sheriff's Department recognizes, respects and will protect the fundamental right to peacefully assemble and the right to freedom of speech and expression.  We ask that individuals interested in expressing their emotions related to the verdict, do so peacefully and with respect to other people and property.  If you are participating in a demonstration and are asked by law enforcement to leave the area, please do so.  If you witness a violent act or destruction of property, please move to a safe place, and report it.”
National leaders have also spoken out.
Vice President Kamala Harris, the first black and first woman elected to the high office, tweeted, "Kamala Harris: "Black Americans, & black men in particular, have been treated throughout the course of our country as less than human. Black men are fathers & brothers & sons... their lives must be valued... We're all a part of George Floyd's legacy & our job now is to honor it." She also emphasized the importance of the George Floyd Justice in Policing Act slated for consideration in the Senate, which aims to hold police departments accountable and to end racial profiling.

In an address to the nation, President Joe Biden called systematic racism “a stain on our nation’s soul, the knee on the neck of justice for black Americans.” President Biden talked about Floyd’s murder as a wake-up call to the entire country. stating, "It was a murder in the full light of day, and it ripped the blinders off for the whole world to see the systemic racism..."

Former President Barack Obama opined that the jury “did the right thing” to see that justice was done in the Chauvin case. But he reflects, “We know that true justice is about much more than a single verdict in a single trial. True justice requires that we come to terms with the fact that Black Americans are treated differently, every day. It requires us to recognize that millions of our friends, family, and fellow citizens live in fear that their next encounter with law enforcement could be their last. And it requires us to do the sometimes thankless, often difficult, but always necessary work of making the America we know more like the America we believe in.”

The nation’s first black President added, “We cannot rest. We will need to follow through with the concrete reforms that will reduce and ultimately eliminate racial bias in our criminal justice system. We will need to redouble efforts to expand economic opportunity for those communities that have been too long marginalized. And as we continue the fight, we can draw strength from the millions of people — especially young people — who have marched and protested and spoken up over the last year, shining a light on inequity and calling for change. Justice is closer today not simply because of this verdict, but because of their work.  Michelle and I send our prayers to the Floyd family, in the hopes that they may find peace. And we stand shoulder-to-shoulder with all those who are committed to guaranteeing every American the full measure of justice that George and so many others have been denied.”