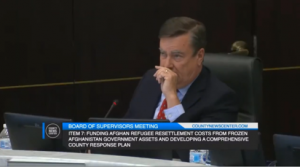 During an Oct. 7 hearing on his proposal to fund Afghan refugee resettlement costs from frozen Taliban assets and to develop a comprehensive county response plan to assist the refugees, Anderson sought to block CAIR from receiving any county funds.  “Any organization that has any affiliation with terrorism in the Middle East could have to be excluded and CAIR would be part of that group,” he said. View video.

In its release, the ADC praised CAIR San Diego for “upholding the constitutional rights and dignity of all Americans, especially American Muslims who have been targets of institutional systemic hate,” adding, “Anderson’s remarks shockingly endanger his own constituents and does not acknowledge how CAIR was skillfully leading the way in preparing for the refugees as they arrived in San Diego County.”

Ojeni Tuma, ADC chapter president, said allowing “hateful and irresponsible comments by an elected official to go unchecked is unacceptable to us, especially when directed against CAIR, an organization with an impressive track record of important victories in civil rights and coalition building in our community and nationally.”

Supervisor Nathan Fletcher proposed an alternative amendment to block any group listed on the Treasury Department’s terrorism watch list.  Anderson explained that while in the state Legislature he authored a measure to divest public pensions from Iran, but drew objections from the Iranian community unless CAIR was excluded. He indicated that CAIR was not listed on the Treasury Department’s list, adding, “There is plenty of funding coming from that organization and going to Hezbollah, and so for the Iranian community, this was a super big issue.”

The Anti-Defamation League (ADL), in its website entry on CAIR, acknowledges that since its founding in 19994, CAIR has positioned itself as “the go-to American-Muslim civil rights organization,” adding, “In recent years, it has focused much of its activity on responding to the proliferation of anti-Muslim incidents and sentiments around the country.”

However CAIR’s history includes some troubling chapters. The ADL reports that the Federal Bureau of Investigation (FBI) ended its cooperative work with CAIR due to evidence introduced during the Holy Land Foundation(HLF)  trial “demonstrating that CAIR and its founders were part of a group set up by the Muslim Brotherhood to support Hamas.” The trial ended in guilty verdicts against HLF and five of its officers, including the founder of CAIR’s Dallas chapter, for funneling over $12 million to Hamas.

But Doris Bittar with the ADC in San Diego disputes that information. "The assault on the Holy Land Foundation is a red herring," she stated in an e-mail to ECM. "These upright individuals were prosecuted twice. The first civil trial was dismissed. They won. The second trial was a military one done out of the sight and they lost. This  organization had the audacity to call themselves the Holy Land Foundation and succeed in raising funds not just for Gaza but for communities who needed medical supplies in parts of the Arab world that the US State Dept. funds. Their other crime is that they were successful." She adds that funds were used to provide ventilators, other life support equipment, masks, aspirin, insulin, and other critical medical items.  To learn more, she suggests reading  The Unjust Prosecution of the Holy Land Foundation Five from The Intercept, by Charles Glass, published in 2018 and the book Injustice: The Story of the Holy Land Foundation Five written by Miko Peled a former resident of San Diego.

CAIR has denounced “all acts of anti-Semitism and hate”  including condemning a Holocaust denial event, but has also drawn criticism for links by some of its former leaders to groups such as the United Association for Studies and Research, described by the ADL as a “Hamas-linked anti-Semitic propaganda organization.”

The ADC San Diego, which represents some 120,000 Arab Americans in San Diego County, has called on Supervisor Anderson to “apologize and retract his incendiary comments” and also urged the County Board of Supervisors to “censure him for his lapse in judgement and responsibility.” The ADC further suggested supervisors attend CAIR and ADC education presentations to “learn about who our communities are and learn about our collective mission in protecting all Americans from ignorance and hatred.”

Other Supervisors, however, rejected Anderson’s call to ban any group with ties to terrorism from getting funding, finding the language to be too vague.  Supervisor Terra Lawson-Remer stated, “I’m not comfortable with giving that level of discretion to our county staff.”

Jim Desmond, the other conservative on the board along with Anderson, did not support Anderson’s proposed amendment but said, “I do think we need to help those out who are already here....I do appreciate that Supervisor Anderson wanted to get out in front of it and go after those frozen assets.”

The version passed by Supervisors did include Fletcher’s amendment to exclude groups listed on the Treasury Department’s Watch list.

A Navy veteran, Shawn VanDiver, told Supervisors he is working with over 95 organizations to help Afghan refugees locally.  He criticized some audience members who made derogatory comments, but praised all of the supervisors including Anderson for “keeping our promise to those who stood by our side for two decades.” He added, “This effort has been the most American thing I’ve ever seen, left and right, all standing together to say our word means something.”

"My statements on Tuesday were directed at a specific organization, CAIR, for its shameful history of radical ties," Anderson said in a written statement on October 11.

“CAIR does not represent all Muslims in America. I have heard from victims in my district who fled their home countries due to persecution and do not feel safe working with CAIR, ”she said. "I support the many renowned American Muslim organizations and residents in Southern California currently involved in the resettlement of Afghan evacuees."

Anderson noted that he supports efforts to resettle Afghan refugees, many of whom risked their lives to fight terrorist organizations such as the Taliban.  “ This is why I wrote a letter to President Biden asking for his help with the evacuations from Afghanistan, and why I wrote the board letter requesting that the county prepare a welcome for the Afghans who are expected to relocate to my district,” Anderson said.

the true anderson has reappeared for everyone to see. this is nothing new for a tRump supporter....we tried to tell you not to vote for this right wing racist.