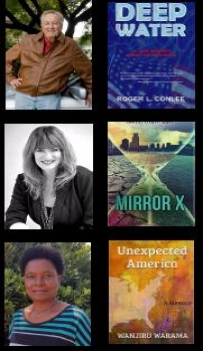 January 4, 2018 (El Cajon) -- The El Cajon Library (201 E. Douglas Ave.), will host its third Local Author Expo on Sunday, January 28, at 2:00 p.m. This free event will feature presentations by three local authors followed by a reception where attendees may meet the authors and enjoy refreshments provided by the Friends of the El Cajon Library.

Wanjiru Warama was born in British colonial Kenya, the daughter of illiterate peasant laborers on a farm owned by a British farmer in the Rift Valley. At the age of 10, Warama saw a printed book for the first time when she started at Tindaress Primary School in Solai, Kenya. Her chances of writing a book seemed slim to none, and yet, in 1995, after many years of traveling between Kenya and the United States, she had the audacity to list “write a book” as one of her goals. Seventeen years later, in 2012, the Friends of San Diego Public Library, Malcolm-X Library chapter, appointed Warama as their president, and in January 2013, she joined a writers’ group in La Mesa, California. After wrangling for six months over what type of book to write, it became clear to her that the book had to be a memoir. Unexpected America is the first book in a series of memoirs about Warama’s life in the United States. She currently lives in La Mesa.

A native San Diegan, Karri Thompson grew up hanging out at the beach, playing sports, and eventually attending San Diego State University where she earned her bachelor’s degree in English and master’s degree in education. When she’s not nerding out at San Diego Comic-Con or watching Star Wars and The Lord of the Rings movies for the umpteenth time, she can be seen doing normal-people stuff like cooking delicious meals for her family (she attributes all her culinary skills to the Food Network) and watching her son’s football games. In her spare time, she writes young adult and new adult fiction (new adult under the name Kalli Lanford) and loves listening to hard rock music and going to concerts. Thompson hopes to live long and prosper and that you will, too.

Roger Conlee has been writing for as long as he can remember, even back in grade school. He was editor of his junior high, high school and college newspapers, then worked for the San Diego Evening Tribune and the Chicago Daily News as a sportswriter, reporter, copy editor and columnist. He later had a career in public relations and marketing before finally sitting down to tackle that first historical novel. Conlee minored in history in college and is especially interested in modern history ranging from the American Revolution up through the 20th Century World Wars. He has lectured at Northwestern University, the University of California, and San Diego State University. Conlee’s seventh and latest historical novel, Deep Water, is a tense, fact-based political thriller that takes place during the early days of the Cold War.