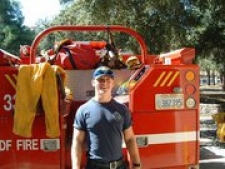 July 13, 2011 (San Diego) – Colby Shigley, 26, a Cal-Fire firefighter stationed at the Lyons Valley station in East County, has died of injuries sustained in an accident July 8th. Shigley was driving a 2000 Cadillac while visiting his terminally ill father in Munro Township, Michigan, when he struck trees and was killed.

Shigley, who lived in Alpine, leaves behind a wife, Justine, and their three children, Jaylynn, 4, Wyatt, 3, and Dylan, 8 months. A fund to help the family, the Firefighter Colby Shigley Memorial Fund, has been established at Navy Federal Credit Union in Santee.

Colby had served with Cal-Fire since 2003 and was an active Marine Reservist who served in Iraq, said Cal-Fire Captain Mike Mohler. He was a 2002 graduate of Christian High School in EL Cajon.

Early news reports in Michigan said alcohol and speed were factors in the crash, however that has not been confirmed yet by the investigators, Mohler said.

A private memorial will be held tomorrow. Flags at local fire stations have been lowered to half-mast and firefighters have shrouded their badges in honor of Shigley.