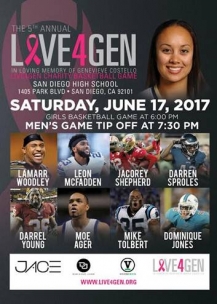 The mission of the Live4Gen Foundation are twofold: to remember and honor the legacy of Genevieve Costello; and to raise awareness and funds that will create and launch programs and initiatives in the San Diego community, providing breast cancer education and resources to young women under the age of 30. Diagnosed with stage IV breast cancer in April of 2013, Gen lost her battle three weeks later at the age of 26.

Live4Gen founder Jerica Williams, Genevieve’s former La Presa Middle School and Mount Miguel High School basketball teammate, has had four childhood friends from the same neighborhood who were diagnosed with cancer, all under the age of 30. Live4Gen strives to provide breast cancer educational resources, teaching the importance of health prevention and early intervention.

The Dominique Jones football will kick off the day from 8am to 12pm with 150 youth campers. At 6:00pm, some of the best girls basketball players to ever come out of San Diego will play in honor of Gen. Head Coach of SDSU Women’s Basketball, Stacie Terry, will join as guest coach. The highly anticipated charity basketball game will take place at 7:30pm in Caver Gym.  To cap off the night, the official Live4Gen celebration and after-party will be hosted at AD Nightclub in the gaslamp. A portion of the money made that night will be donated to Live4Gen.

With Jam’n 95.7 as the official radio station, live music, food vendors, raffles, give aways, photo ops, red carpet and sports, this fun-filled event will be a day for the entire family to enjoy for a great cause. Ticket and donation information can be found at live4gencharitygame.eventbrite.com.