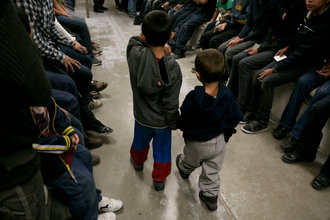 "Jesus himself was a refugee, who with his family fled to a foreign as an infant." --Rev. Kaji Dousa

View or sign a petition to help the children: http://tableucc.com/witness/sign-the-petition-central-american-refugee-crisis/

August 7, 2014 (La Mesa)—United Church of Christ in La Mesa has stepped forward to help children from Central America who have sought refuge in the United States, fleeing violence, drug trafficking and threats of death.   The public is invited to a Border Children panel discussion on Sunday, August 17 at 3 p.m.  at the church, located at 5940 Kelton Avenue, La Mesa.

“We need to welcome the strangers. We need to help those in need,” Doug Brunson with UCCLM told East County Magazine in a recent radio interview, quoting Jesus.  “This is a crisis…something that needs to be addressed now,” he said of the 50,000 children.

The event will feature Sister Justine Church from the Interfaith Council, Dr. Richard Short, a pediatrician who treats many immigrant children, and Enrique Morones from Border Angels.  The panel discussion will address the roots of the crisis and what can be done to help resolve it.

The church invites people to sign a petition calling on the President and Congress for funding for refugee resettlement, access to legal services, and other protections to help the children:

The church is also collecting donations and goods for the families who have arrived in San Diego. Some have been crowded into overcrowded holding facilities; others have faced crowds of angry demonstrators.  To arrive here, some ride atop fast-moving trains, risking life and limb.

“I think it’s important that a progressive voice, a Christian voice is recognized…these are children in need. They should be loved and welcomed…not shouted act and having signs waved at them," Brunson says."It’s a reality that children shouldn’t die when we can welcome them, we can handle them, and in many cases we can put them with families who are already here.”

The church has also met with Congresswoman Susan Davis over its concerns and set up a letter writing effort including a page where people can contact their own members of Congress. http://tableucc.com/witness/a-community-of-welcome/

You can also volunteer to accept a child awaiting processing,” Brunson adds.

The congregation got inspired to take action following a sermon by Rev. Kaji Dousa.

"As we consider how we are called to respond to the unprecedented numbers of children crossing our borders, how might the Scriptures be guiding us?" Rev. Dousa asks, citing these Biblical passages as guidance.

This is the sin of your sister Sodom: She and her daughters were proud, had plenty to eat, and enjoyed peace and prosperity; but she didn’t help the poor and the needy. (Ezekiel 16:49)

When an alien resides with you in your land, you shall not oppress the alien. The alien who resides with you shall be to you as the citizen among you; you shall love the alien as yourself, for you were aliens in the land of Egypt: I am the Lord your God. (Leviticus 19:33-34)

Moreover, she concludes, "Jesus himself was a refugee who, with his family fled to a foreign land as an infant."

When the magi had departed, an angel from the Lord appeared to Joseph in a dream and said, “Get up. Take the child and his mother and escape to Egypt. Stay there until I tell you, for Herod will soon search for the child in order to kill him.” Joseph got up and, during the night, took the child and his mother to Egypt. He stayed there until Herod died. This fulfilled what the Lord had spoken through the prophet: I have called my son out of Egypt. When Herod knew the magi had fooled him, he grew very angry. He sent soldiers to kill all the children in Bethlehem and in all the surrounding territory who were two years old and younger, according to the time that he had learned from the magi. (Matthew 2:13-16)