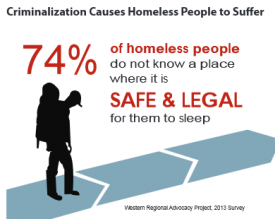 August 11, 2014 (San Diego’s East County) – A national report has singled out El Cajon as a negative example of how to handle homeless issues.  According to the National Law Center on Homelessness & Poverty reported titled “No Safe Place,” El Cajon is among a growing number of cities putting homeless people in jail for sleeping in public places, without offering long-term solutions to help the homeless get off the streets and back on their feet.

El Cajon has 513 homeless people- the highest of any East County community, according to the Regional Task Force on the Homeless annual point-in-time count conducted in January.  Over half (52%) of El Cajon’s homeless people don’t have access to any shelter. Yet the city has outlawed or restricted sleeping in public places such as parks, camping, begging on public streets and even sleeping in vehicles, according to the report which surveyed 187 cities nationwide.

El Cajon has no city-run homeless shelter (nor does any city in East County), though it does allocate some funds to a church-run homeless program.  But it’s not enough for the many still living on the streets.

Nationally, the survey found a 43% increase in laws that make it a crime to be homeless enacted over the past two years.  But having a criminal conviction can make it even harder for a homeless person to get a job and get off the streets.

The report concludes, “This increase in city-wide bans shows that the nature of criminalization is changing and that cities are moving toward prohibiting unavoidable, life sustaining activities  throughout entire communities rather than in specific areas, effectively criminalizing a homeless person’s very existence.”

The City of San Diego also bans sleeping in public places and cars, as well as blocking public right-of ways, though San Diego Police Sgt. Teresa Clark told the UT San Diego that such laws are usually only enforced when someone is not cooperative.  She calls this “compassionate enforcement.”

Thomas Theisin heads up the Reiognal Task Force on the Homeless. He calls such laws “inappropriate” and notes that San Diego has over 1,200 homeless people downtown alone who are not living in shelters.

Some cities have even made it illegal for individuals or organizations to share food with homeless people, effectively leaving some with no legal alternative except to starve.

Others conduct homeless sweeps ostensibly for sanitation purposes, but the sweeps also property of homeless people including medications and vital papers such as birth certificates  The report documents instances where homeless people  required emergency treatment after having medications seized or destroyed; in one case police also destroyed a homeless person’s wheelchair.

Across the nation, courts have struck down some laws criminalizing homelessness on grounds that they are unconstitutional, violating the First Amendment freedom of speech, the Eighth Amendment protection against cruel and unusual punishment, or the right to due process of law under the Fourteenth Amendment..

But for those who are homeless in America, those human rights are rapidly being eroded.

The report recommends that this trend be reversed through actions that can be taken at the state and federal level to protect the rights of homeless people, including federally funded housing and a Homeless Bill of Rights that state legislatures could enact. In addition, the report suggests that Department of Justice make sure community policing funds cannot be used to target the homeless.

A homeless acquaintance of mine was ticketed in El Cajon last month for sleeping on private property. His case is still pending but the charge potentially carries a fine of $400 and 3 months probation. He was sound asleep at 1 AM; bothering no one. Unless a private property owner should object, and in the absence of a specific complaint, a homeless person in this situation should be left alone. Better than that, the city should provide alternatives for homeless people.
I used to see a man who was in really bad shape in my neighborhood. Bad. He needed help. His skin had the out in the sun all day constant sunburn and he wore clothing that was falling apart. Another man would take recycling items from the blue bins in the wee hours and my neighbor told me his daughter goes to the elementary school across the street. Trying to survive. We must help the homeless and people in need. Yes there are some who know how to game the system so try to fix that.