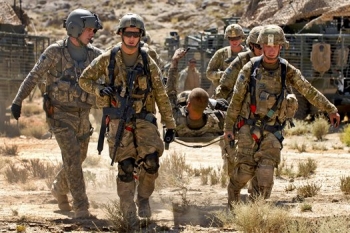 “Drawing down troop levels in Afghanistan is the right call but, without a change of strategy, shifting away from nation building and putting greater emphasis on counterterrorism operations, progress will remain slow and current mission objectives will be more difficult to meet,” said Rep. Hunter in a prepared press statement. “We now hear from Admiral Mullen and others that the Afghan strategy will stay the same despite the start of troop withdrawals.” He noted that billions of dollars spent to install a credible Afghan government are “lagging” and called on changes to avoid risking security gains made.

Susan Davis (R-San Diego) said the focus can’t be solely on number of troops withdrawn, but instead on how the remaining troops are utilized, the San Diego Union-Tribune reported. She called for a smooth transition to Afghan security forces.

Rep. Bob Filner (D-Chula Vista) was the only member of San Diego’s Congressional delegation to sign a bipartisan letter to the President sent Tuesday urging that a “significant and sizable” troop withdrawal begin in July. He previously had pushed for troop withdrawals to begin late last year.

Brian Bilbray (R-Carlsbad) said the Taliban and al-Qaeda remain threats and urged the President to “focus more on America’s war in Afghanistan rather than devoting American resources to the conflict in Libya.”

Rep. Darrell Issa (R-Vista) supports prompt return of American troops but expressed concern over corruption in Afghanistan that he believes has undermined advances made. He called for leadership by President Obama to “address this pervasive problem within the Afghan government.”