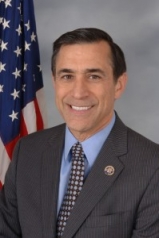 Issa, a Republican, has 48.8% of the vote with all but provisional ballots counted.  Democrat Doug Applegate has 47.86%, trailing Issa by less than 1% in San Diego County, while Ryan Wingo has 3.29%.  The district also includes part of Orange County, where Issa fared better, leading Applegate 57.5% to38.6% but with far fewer voters.  Adding both counties together, Issa has 51.2% ,Applegate 45.4%  and Wingo 3.4%. Wingo is a nonpartisan candidate running on a platform of legalizing marijuana and opposing war. Wingo voters would  be most likely to vote Democratic in a two-person run-off,  meaning Issa could be in for a battle in November to hold onto his seat.

In an e-mail to supporters, Applegate wrote, "It was a terrific first step for our grassroots movement to end the partisan gridlock in Congress and finally solve the problems that have plagued our community for too long. But now our community faces a crucial crossroads. We have a choice between protecting or privatizing social security, between safeguarding basic social rights and denying them the rights they deserve, and between providing better support to our veterans and continuing to ignore them."

In the 50th Congressional District, Republican Congressman Duncan  Hunter took 58% of the vote and will square off for a run-off against Democrat Patrick Malloy, who took 22%. David Secor, a Democrat running for the second time, had 11%, RepublicanScott Meisterloi 10%, and H. Fuji Shioura, a nonpartisan candidate, 3%.

In the 51st Congressional District encompassing the southern portion of East County and Imperial County, Democratic Congressman Juan Vargas waltzed to an easy win, with 67% of the votes in San Diego County and nearly three-quarters of the votes in  Imperial County.  All federal races require a run-off among the top two candidates, so Vargas will square off in November against Republican Juan Hidalgo Jr. who got 16% of the vote locally.

Democratic Congressman Scott Peters won 59% of the vote in the 52nd Congressional District and will face Republican Denise Gitsham,who got 16% , in November.  The five challengers,all  Republicans, took a combined 41% of the vote.

In the 53rd Congressional District, Congresswoman Susan Davis had an easy with with 65% , or nearly two-thirds of the votes.  She will run off against Republican Jim Ash, who had 16%.  Republican James Veltmeyer had 15% and Democrat Nick Walpert 4%.

"In the 50th Congressional District, Republican Congressman Duncan Hunter took 58% of the vote and will square off for a run-off against Democrat Patrick Malloy, who took 22%. "

if there are only two candidates in the primaryand even if one candidate in a larger field gets 50%.

Only in city and county races can a candidate win outright in the primary with 50%.

or less. That's when national political parties,PACs etc. will pour money into a challenger, as we saw in the past over the battle for the seat currently held by Scott Peters.

Issa won by a scant 1.2% if these numbers hold when provisoinal ballots are counted, and by the way a lot of Sanders voters were forced to vote provisionally, so if anything the final county may show Issa's lead  disspating further or disappearing.

The GOP will also likely throw a lot of money into helping him keep his seat, or he will need to spend some of his personal fortune to fight off a feisty challenge, it appears.

His district was reapportioned  in 2010, and is not as solidly Republican as it was in the past. Perhaps the demographics have shifted again with a surge in registrations in parties other than Republican.

Issa has the MAJORITY of the vote but he is going to have a hard time getting elected? Must be "progessive" math as it makes no sense to me.