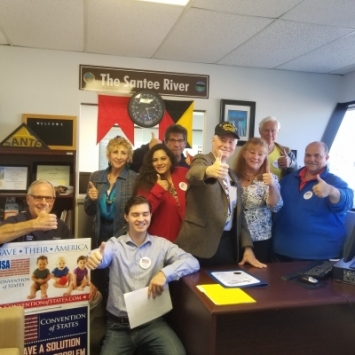 Photo: Assemblyman Randy Voepel, center, gives a thumb up to a Convention of States during meeting with local supporters

February 19, 2019 (San Diego’s East County) – The U.S. Constitution grants states the power to call a Convention of States to propose amendments to the federal constitution. To do so would require that 34 states agree to call a convention, though it would take 38 states to ratify any proposed amendments.

A national movement has begun among conservatives seeking to convene such a convention, with Assemblyman Randy Voepel (R-Santee) the latest to voice support for the idea.

Convention of States Project delegates met with Voepel on February 8th to brief him on the project’s status.  “Constituents then introduced themselves and hared their views and concerns,” says Barry Allen Treahy of Lakeside, a member of the group.  “We asked Assemblyman Voepel how we could assist him and his reply was understanding and communications.  Assemblyman Voepel has read our Executive Summary of the Convention of State Project and stated that he will continue to support our project.”

The local group  also has a meeting coming up with State Senator Brian Jones, and has quarterly meetings planned with Voepel, Allen says.

Fred Yerrick with the local Convention of States Project says that  the group believes a convention is necessary to reign in a federal government that “continues to overstep its bounds. We can’t vote our way out of the mess Washington D.C. has made. We have a runaway bureaucracy, bloated government, massive deficits and well over $100 trillion in unfunded liabilities.”

He contents that the framers of the Constitution foresaw that government could grow to be “oppressive” and so included Article V to give the states a way to propose constitutional amendments that bypass Congress. It’s never been done in our nation’s history; all prior amendments were first approved by Congress before being ratified by states.

The website www.conventionofstates.com states that the current effort seeks to convene a convention that would be limited to allowing states to discuss amendments that “limit the power and jurisdiction of the federal government, impose fiscal restraints, and place term limits on federal offices.”  The site claims that since the project launched in 2013, it has garnered over 3 million supporters nationwide including petition gatherers in every Congressional district. Nationally prominent supporters include Republican Senators Rand Paul and Marco Rubio, former Alaska Governor Sarah Palin, and former Florida Governor Jeb Bush.

Conservatives aren’t the only ones to propose a convention of states. Some liberal groups have also sought one, though for far different reasons.  Wolf PAC, a liberal organization, for example has called for a convention of states to reform campaign finance laws in order to reign in dark money and corporate donation in the wake of the Citizens United decision by the Supreme Court.

But some warn that a convention of states could be a Pandora’s Box that could result in unintended and potentially negative consequences.

In an editorial published in The Hill, a newspaper serving the Capitol area in Washington D.C., Georgetown Law School professor David Super states, “Calling an Article V convention is reckless, especially at this divisive moment in our nation’s political history.”

Super, who also served as general counsel for the Center on Budget and Policy Priorities, warns,  “Nothing in Article V, or anywhere else in the Constitution, authorizes Congress, state legislatures, or anyone else to limit the agenda of an Article V convention. And even if they did, the Supreme Court has made clear that the process of amending the Constitution is a “political question” into which the courts would not intervene. Once the delegates convene, they are answerable only to themselves,” he adds, noting that the Constitution does not gives states power to constrain their delegates or dictate how they should vote.

The legal scholar and budgetary expert advises that in foreseeing the possible outcome of a convention to alter the Constitution, we can learn from the past.

”The product that emerges from an Article V convention could be radically different from what those asking it to be called may have envisioned,” Super concludes, “just as the Philadelphia convention of 1787 departed sharply from its mandate to propose amendments to the Articles of Confederation.”

The effects of this could be potentially interesting in the future.